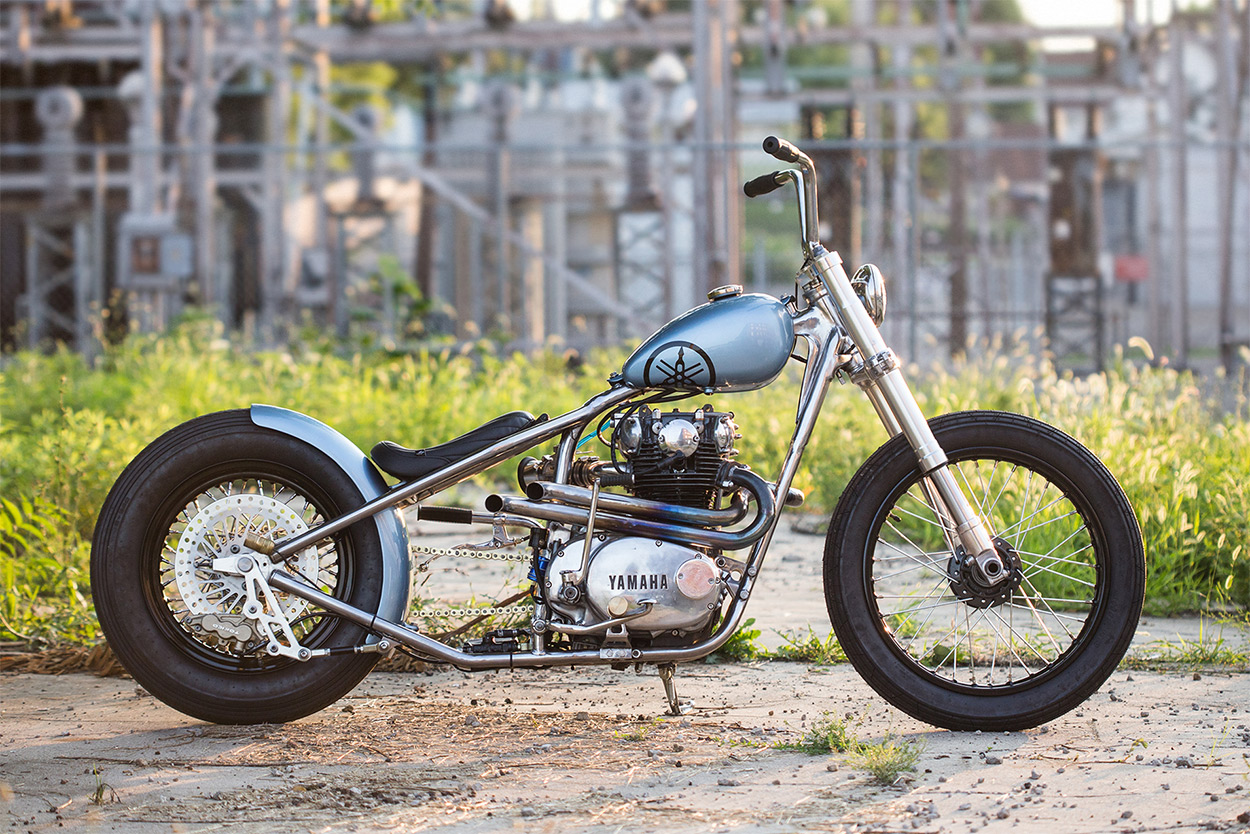 Blue Is The Color: an icy Yamaha XS650 bobber

To hell with the sensitivity: this bobber has no front brake, no rear suspension and a suicide shifter. But look at it.

Like any self-respecting bobber, this Yamaha XS650 is an exercise in supreme minimalism. But the job goes far beyond just throwing random coins in the trash. 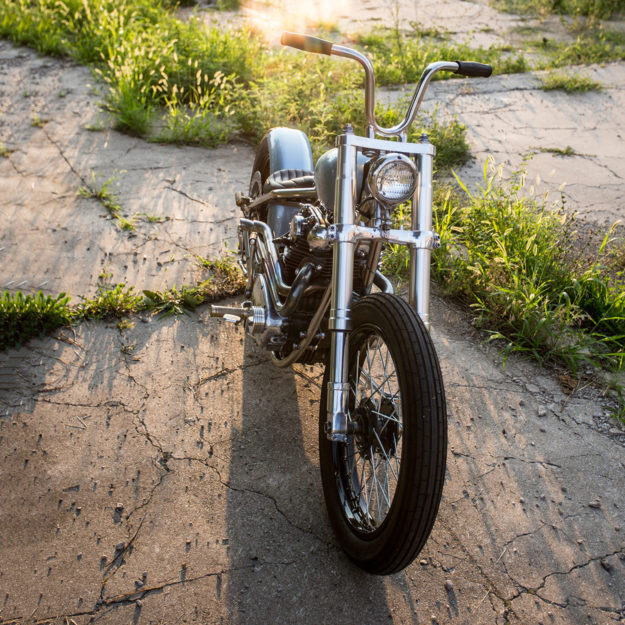 It’s a 1972 XS650, built by Justin Kagy and Kieran Thompson of FKKMOTO in their self-proclaimed “garage” in Bloomington, a small town two hours south of Chicago.

The project started with the frame: Justin and Kieran removed the rear half and added a Voodoo Vintage MK21 hardtail. This resulted in a 4 inch stretch and a 3 inch drop. 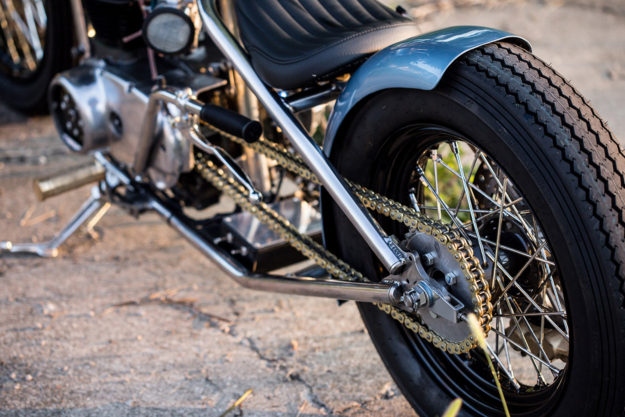 In contrast, the front end has been upgraded with a set of Suzuki GSX-R inverted forks. They are hooked up with a top tee from Cognito Moto.

The original 19-inch wheel from the XS650 remains up front, but the guys replaced the rear with a 16-inch Harley-Davidson Sportster item. It is fitted with a Tokico 6-piston caliper, borrowed from a Suzuki Hayabusa, to compensate for the lack of a front brake. 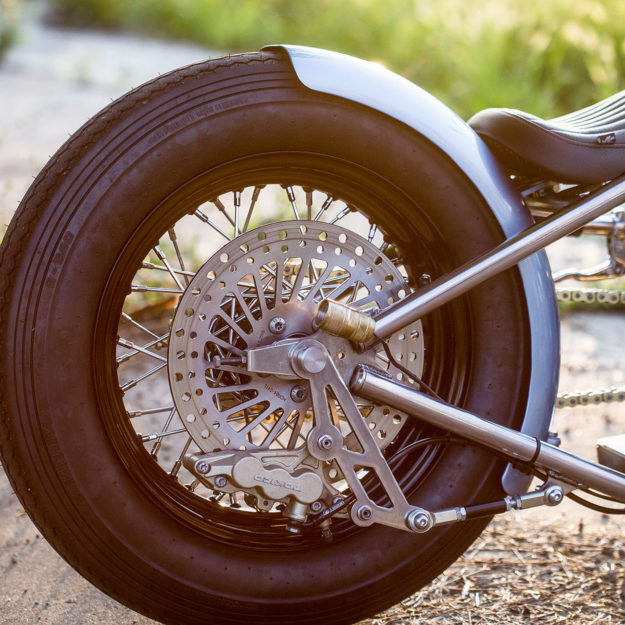 The engine has been completely overhauled and treated with new gaskets, gaskets, pistons, rings and freshly bored cylinders. Note the single carb setup: it uses a 2-into-1 intake from Counterbalance Cycles, powered by a Mikuni VM36 carburetor. 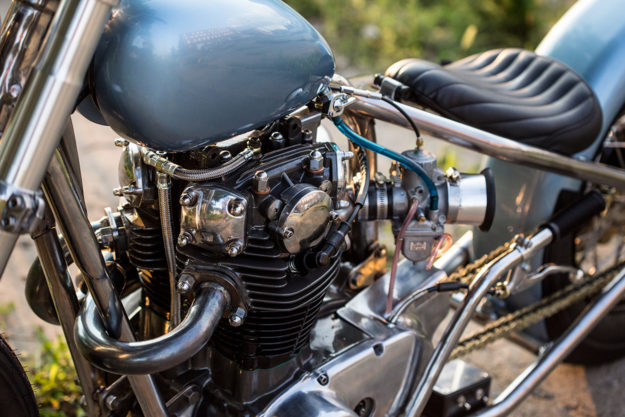 Thanks to a Sparx capacitor and a Hugh’s Handbuilt CDI, the XS650 is now battery-free. A small electronic box at the base of the frame stores the important bits. 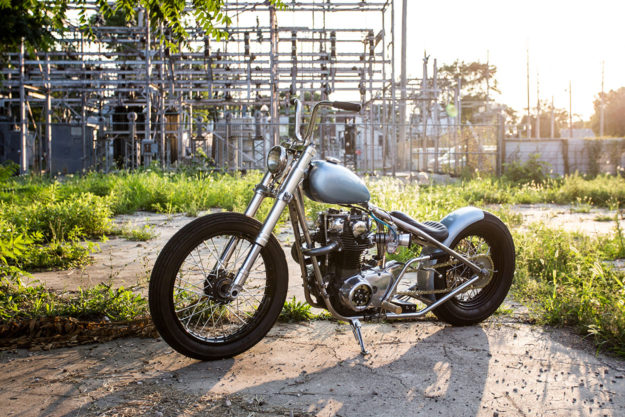 But our favorite mod is the unusual suicide shift: a handlebar-like layout, complete with clutch lever and grip. Kieran tells us: “The idea of ​​the suicide shift was born out of our endless quest for clean bars.

“It was our original design to begin with, which then evolved into an internal torsion clutch setup, then quickly reverted to the original plan, having determined that the internal clutch setup was wrong. not be strong enough to operate the notoriously tough XS clutch. “ 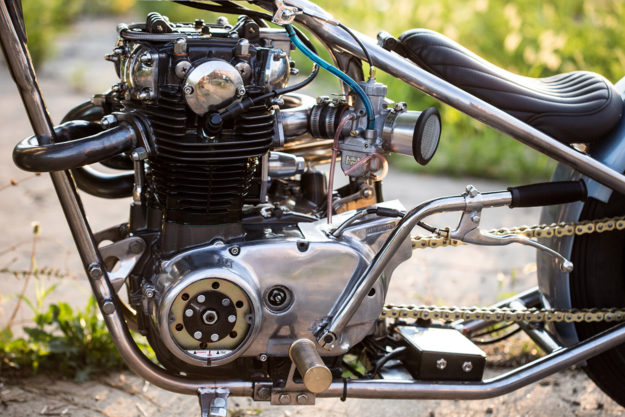 “So we made a lightweight arm that we thought fit the lines of the bike well, and added a lever for actuating the clutch and the rest was history. It works great!”

The handlebars are a unique “flying Vee” design from FKKMOTO. And they’re of course clean – with no clutch or front brake to house, the only control is a throttle with cables routed inside. 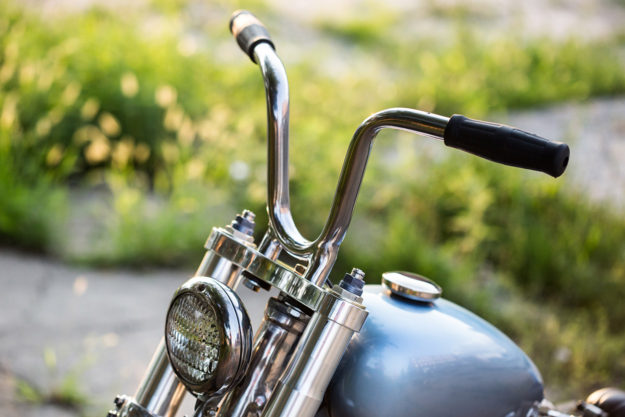 FKKMOTO finished the bike with a mix of carefully selected and internal parts. The tank and DIY kit used to build the exhausts are from TC Bros Choppers, while the seat is a creation of Counterbalance Cycles.

But the tail light, footrests, ankle braces and rear brake mount are all customized. FKKMOTO drew up the designs, then turned to his good friends at G3 Machining to cut them out. (We asked if the parts would be for sale, and the guys said they were looking into it.) 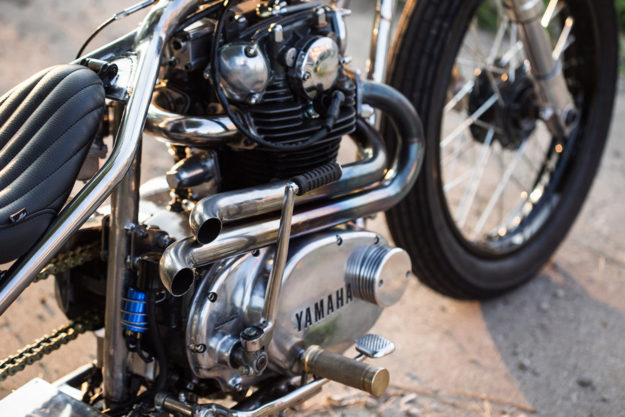 FKKMOTO isn’t too proud to admit that he doesn’t know everything. They have therefore surrounded themselves with talented friends who can fill in the gaps in their skills. Dusty Ghert is one of those friends – he helped the guys hone their welding skills throughout the project. 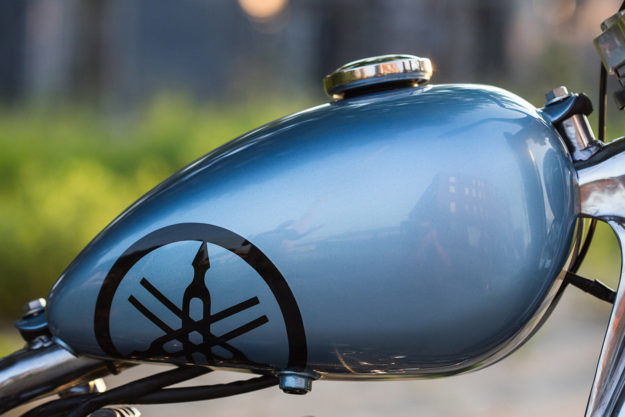 “We dedicated this build to Kieran’s grandfather, Floyd,” the guys tell us, “who passed away shortly before this build was completed. Kieran wanted a vintage color that reminded him of a shirt his grandfather Floyd could have worn. “

Perfect lines, clever details and lots of character: we would call it a fitting tribute. 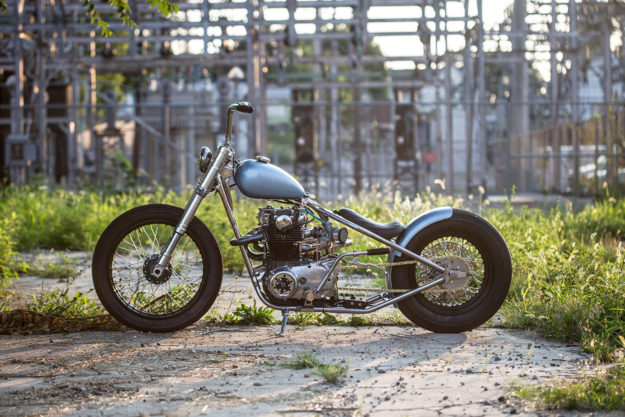