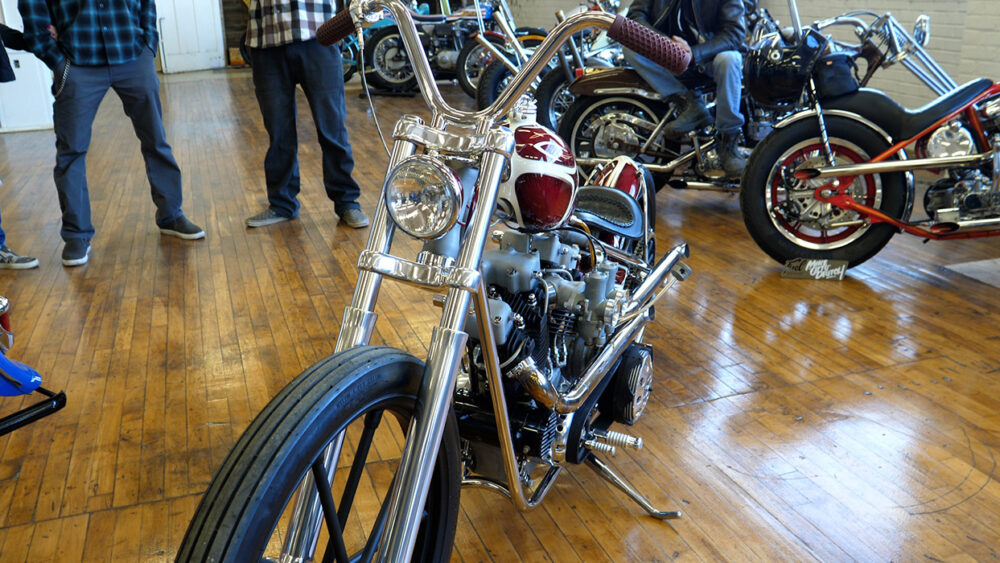 Sometimes all a builder wants is a little attention. It reaffirms the work done and gives the biker community something cool to watch. Brock Bridges is one of those guys who just wants to get people talking.

“I just wanted to do something different and throw people off,” Bridges told us, referencing his custom bike.

The motorcycle in question is a completely custom-built 1972 Harley-Davidson Sportster, which Brock decided to flip its head 180 degrees. Lots of time and metal shavings went into the effort, along with a set of modified rocker boxes that were split in half to fit on top.

The name of the Ironhead engine is not very subtle, just like the rest of Harley-Davidson’s old V-twins. The particular engine was the first in the marque’s catalog to feature iron cylinder heads instead of aluminum ones, making for a much more robust and reliable experience.

The 1000cc engine is one thing, but the bike itself stands out mainly for its bright red paint job with white stripes. Like every other aspect of the build, the paint job was done in-house by Bridges at their garage located in Springfield, IL.

The project started with the Ironhead engine, Bridges slowly building everything else encompassing the full build. He even built and fabricated the two wheels, as well as the stainless steel frame and hand-sewn seat.

With craftsmanship like this, we’re excited to see what Bridges builds next!

Advantages and disadvantages of debt consolidation