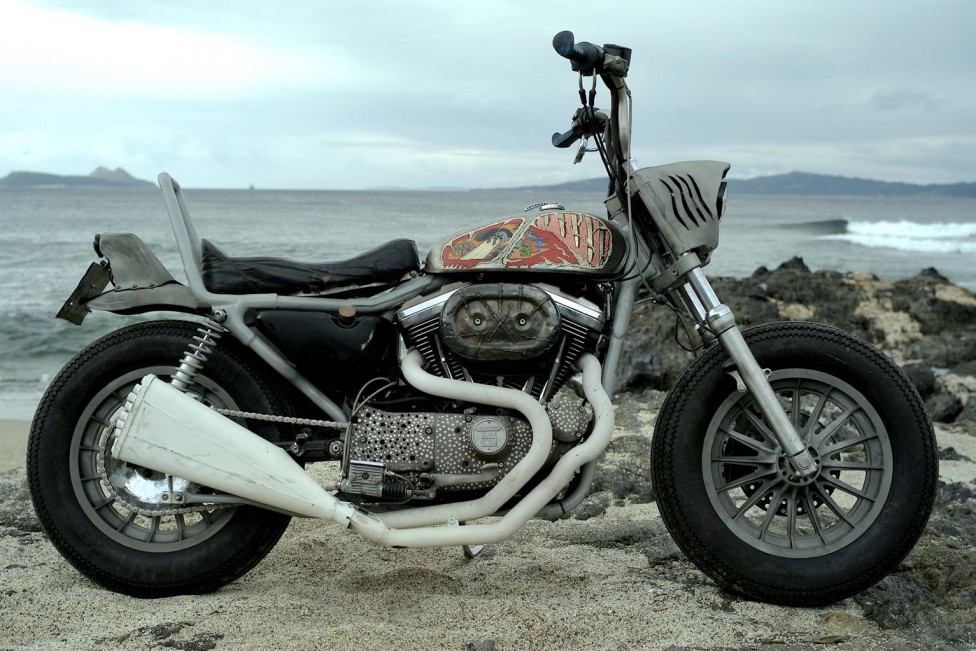 To make ends meet, David chose a 1998 Harley-Davidson Sportster 1200 with barely 10,000 miles (16,000 km) and in fairly good condition. The engine did not need any repairs and was left intact. The rest of the bike on the other hand …

Well, let’s say there is only a fraction of the old Sportster 1200 left in the Marrajo. The first thing Borras did was throw away the original tank and replace it with an old Ducati, with London artist Maxwell Paternoster giving it its magic. The chassis was modified in the rear part, and it received a fixed passenger backrest, while the whole structure received a navy gray paint.

New original Red Wing shocks were fitted to the rear and modified with custom springs, as both suspensions had to be lowered. The fork received custom triple shafts made in-house, and FSC supplied the new stainless steel bars, ending in vintage Oakley grips.

David Borras’ trademark “gills” also found a place aboard the Marrajo, as we sort of expected, and an organic-looking headlight housing was made. It houses NOS Puch lights, contrasting with the LED tail light and license plate lighting. Mini-turn signals were fitted to the fork and subframe, with custom brackets displaying drilled patterns.

The frame-related work was completed with molded footrests, a Bates mirror and vintage leather seat and custom rear spoiler for the taillight. The 16-inch wheels come from a Harley-Davidson Shovelhead and were shod with Firestone 5.0 tires and a modified Bultaco alloy fender installed.

El Solitario made a custom shotgun-type silencer with no less than 25 openings, and a JAG oil cooler was installed under the gill lighthouse nacelle. Borras also loaded a chain conversion kit on the Sportster 1200, a cast iron ignition cover from Chopper Dave’s, drilled through the crankcases and added “gear holes” in almost every possible spot.

The rear wheel had not one, but two Nissin calipers for stopping power similar to that of a stunt motorcycle, while a military bag was strapped to the left side of the frame. Add welded “battle scars” to the airbox cover and get ready to choose your spot on the “I love El Marrajo” or “I hate the damn bike” teams. Here we loved it!