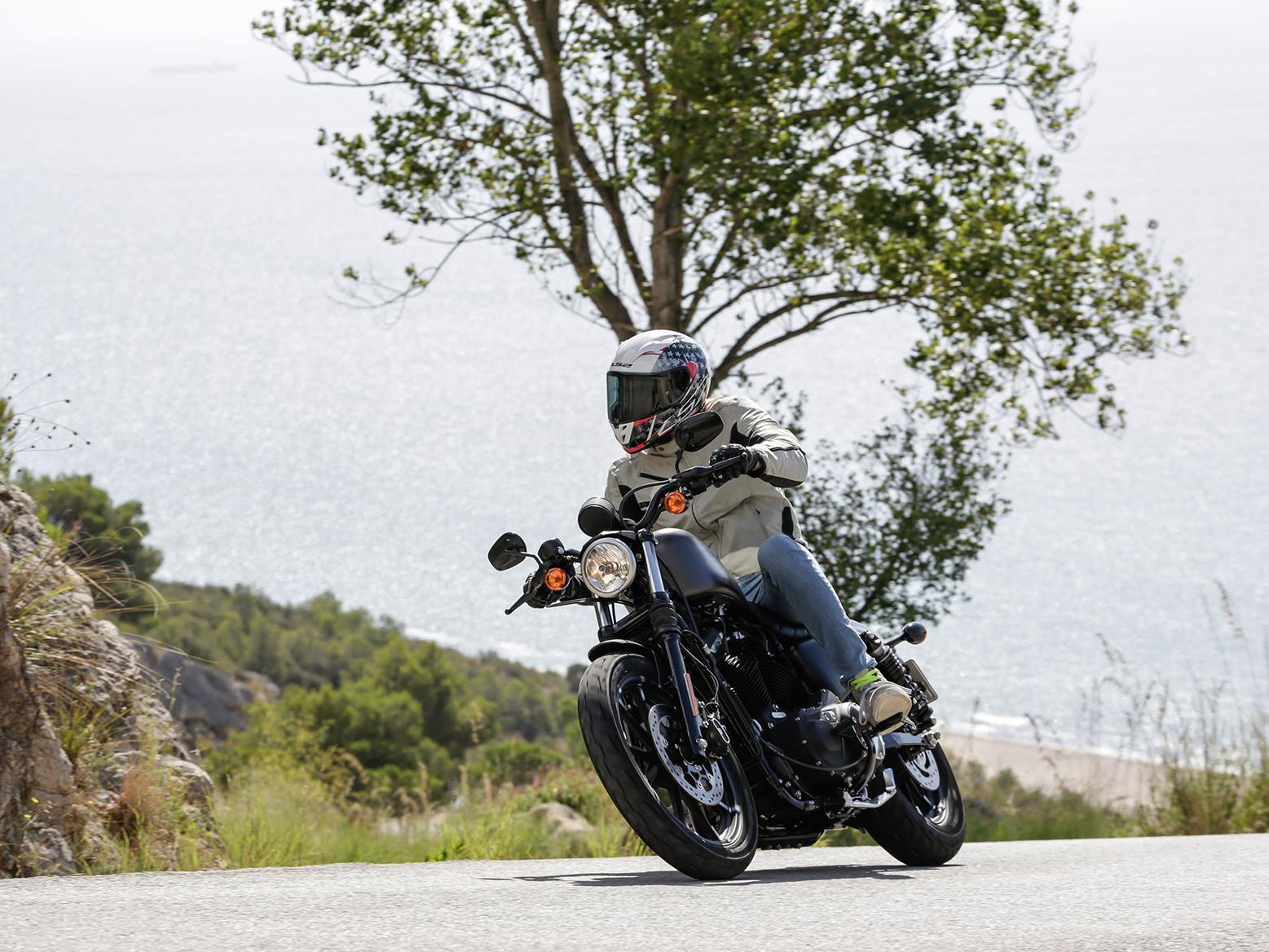 Sorry foes, but the Harley-Davidson Sportster 883 iron is a good bike for an entry-level cruiser. These last five words are essential. Compared to another entry-level midweight, say a Yamaha MT-07, the Harley Iron 833 looks all kinds of bad (especially if you’re just referring to the spec sheet).

But compared to other entry-level cruisers, it’s a fun machine with no frills and no gimmicks. It’s also not about trying to be a Harley-Davidson, like the Honda CMX500 Rebel or the Kawasaki Vulcan 650 for example, which matters a lot.

It’s a hard thing to explain, but the Iron 883, like many other Harleys to be honest, has a certain something that makes it more than the sum of its parts. They are undoubtedly expensive, undernourished and overweight, but they are also very good pieces of metal.

It has a heavy clutch, its brakes are relatively poor, its steering is slow, the engine is relatively clunky (as is the gearbox), and the rear cylinder gets uncomfortably hot in traffic – but it looks like a real Harley and it does. shouldn’t be underestimated.

Compared to the Street 750 (Harley’s old entry-level pig), the 883 has cleaner lines with its cleaner, simpler design and the absence of a radiator. Then there’s the iconic ‘peanut’ tank, two side exhausts, classic rear ‘mudguard’ and ‘drag’ style bars. If you removed the HD badge from the iron, you still won’t know who made it.

Driving the 883 is fun – and that’s what matters most. It doesn’t feel like driving a knockoff of a Harley – it feels like a real deal.

There is a thriving community of Harley-Davidson enthusiasts run by the company itself called HOG – Harley Owners Group.

This bike is also very popular with those who like to personalize their motorcycle. It appears in our article on the best custom motorcycles. Mutt Motorcycles even created their own custom blackened Iron 883 in 2018.

For 2015, Harley-Davidson upgraded the entire Sportster platform to â€œProject Rushmoreâ€. There were some results, but most important for the Iron 883 was a completely new suspension and much better brakes.

They are not labeled but they are from aptly named brands: the suspension is from Showa and the brakes are from Brembo. The result is a much improved ride across the board. The forks are now much more progressive and no longer crash into bumps, although they do have a fairly short travel (92mm), so braking in a pothole still sucks.

At the rear, preload is now adjustable over a 50mm range, instead of the three options previously, but again the travel is short (just 41mm) so rough roads are kidney experiences. Rivals, like the Indian Scout, handle this much better.

New dual piston calipers front and rear give a lot more bite and feel better at the lever, but still require a bit of effort to pull quickly. ABS was an option until 2017 and works as it should.

On the road, you won’t really notice it, as you will rarely get to the speed at which you are going to mess with the brakes.

The Harley Iron 883’s engine is both its greatest asset and its greatest weakness. It’s a real Harley engine, so it’s a 45 degree air-cooled V-twin – like most other Harleys since 1912. That means it sounds great and rumbles as it should, unlike the chilled water Rue 750 and Rue Rod.

However, that means it doesn’t create a lot of horsepower or torque (only 51.2 hp and 50.2 ft-lbs respectively). To give it a bit of a head start, it has a few pretty low first gears, but it also only has a five-speed gearbox and a clunky one at that.

It also means he can feel a bit invigorated and breathless on the freeway. And while the air-cooling looks good, you sit remarkably close to that rear cylinder, which slows down circulation and in hot weather things can get a little warm in your pants. There are no two ways about it, but the competition has been licking the iron here.

The air-cooled Evolution engine in the Sportster lineup has been around for so long now that all major issues have been resolved. The only potential villain that remains is the spring plate in the clutch, which is known to fail and can be an expensive fix.

It’s a lot cheaper (and easier) to swap out a few extra clutch discs beforehand to prevent this from happening. Oil dripping from rocker arms is not unheard of, but it is a cheap and easy fix. Other than that, it’s just a matter of changing the oil every 5,000 miles.

Like most Harleys since the mid-1980s, the engine has hydraulic valve lifters, so they never need valve adjustment, while the final drive runs on a belt. Keep it properly adjusted and you can go over 60,000 miles without a replacement.

Overall the build quality is good, but a few issues do occur on a regular basis. The rear of the front and rear fenders are prone to rust, while the area under the fork seals is known to corrode. A generous coating of XCP or ACF-50 should ward off the worst of problems, but like all bikes, if you ride them in bad weather and don’t take care of them, they won’t respond well.

Our review of Harley-Davidson Sportster 883 Iron owners shows a lot of love for this bike: “don’t hit it until you’ve tried it”.

The purchase price of an Iron 883 is similar to that of the big rivals, namely the Indian Scout Bobber and the Triumph Bonneville T100, although they come with more “stuff” as standard.

Where the Iron 883 really makes sense is in five years.

This model came out in 2015 and you’d be hard pressed to find a good one for much under Â£ 5,500. Older models hit a floor price of Â£ 4000 as long as they are in good condition. If you buy a serviced used model and take care of it yourself, it’s easy to sell it for exactly what you paid for.

Besides the Scout and Bonnie mentioned above, other Iron 883 rivals include the Honda CMX500 Rebel, Ducati’s Scrambler 800 lineup, Moto Guzzi’s V7 and V9, as well as the Kawasaki W800. You can also consider the Kawasaki Vulcan S, the Yamaha XV950 lineup, and Harley’s Street Bob.

In terms of driver aids, a Sportster 883 iron is basic – you get dual channel ABS and that’s it. However, there’s a lot more going on underneath.

For starters, the ABS flows from the wheel bearings, so there is no ugly sensor ring bolted to the wheels. Then there’s a fully keyless ignition with a key fob, which requires a button to turn it on and go. Keyless ignition also includes motion alarm (with loud siren) and immobilizer.

The clocks have a speed, digital RPM, speedometer, two trips plus an odometer and everything is controlled from a toggle switch on the bars. The only thing it lacks is a fuel gauge, which is available as an extra but that’s a stingy omission considering the small tank (the fuel light comes on at around 110 miles). The iron also has auto-canceling indicators, which are some of the few auto-cancellers that actually work the way you would imagine.

The Harley Iron 883 was first introduced in 2009 as a dark and menacing antidote to the colorful and brash middleweight Harleys that came before it. It was updated in 2015. As of 2021, the 883 was no longer on sale in Europe.

The term “Sportster” is not actually a model name but defines a whole family of Harley-Davidson models. These include:

Find out more about the complete HARLEY-DAVIDSON sportster range

Reservations open for Harley-Davidson Sportster S in India, launch by end of 2021