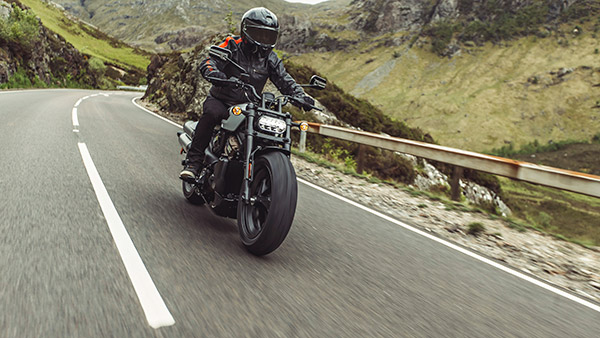 Speaking of the engine, the new Sportster S features an all-new Revolution Max 1250T engine. The 60-degree V-twin engine (obviously) displaces 1,252cc and features liquid cooling. The Sportster S engine produces 121hp and 125Nm of peak torque which is sent to the rear wheel via a 6-speed manual gearbox and slipper clutch.

The engine vents its fury out into the world through a large 2-1-2 exhaust setup that exits slightly below the rider’s seat. The new engine is a stressed member of the new Sportster S chassis. The new Harley sports a tube-frame chassis with Showa suspension at each end.

The 2021 Harley Davidson Sportster S features a staggered wheel setup with a 17-inch wheel up front and a 16-inch wheel in the rear that are shod in Dunlop 160/70 TR17 and 180/70 R16 tires respectively. Both wheels are lightweight cast aluminum units.

The new Harley Davidson Sportster S is 2,265m long, 843mm wide and 1,089mm high. The bike has a long wheelbase of 1,519mm and a seat that sits 752mm above the ground. The Sportster S’s ground clearance is a bit of a worrying 93mm. The Sportster S fuel tank holds 11.8 liters of fuel with 3 liters reserve. Harley claims a fuel economy of around 21 km/l. The Sportster S has a claimed wet weight of 228 kilograms.

The display can also connect via Bluetooth to the Harley-Davidson app which allows the rider to receive phone call alerts, navigation alerts and connect to their music. Harley has also equipped the new Sportster S with a USB Type-C port to keep phones charged.

The Harley Davidson Sportster S is one of the newest motorcycles in the Harley lineup and is a true single-seater for the rider looking to ride the highways of the country. We expect the new Harley to cost upwards of Rs 15 lakhs.