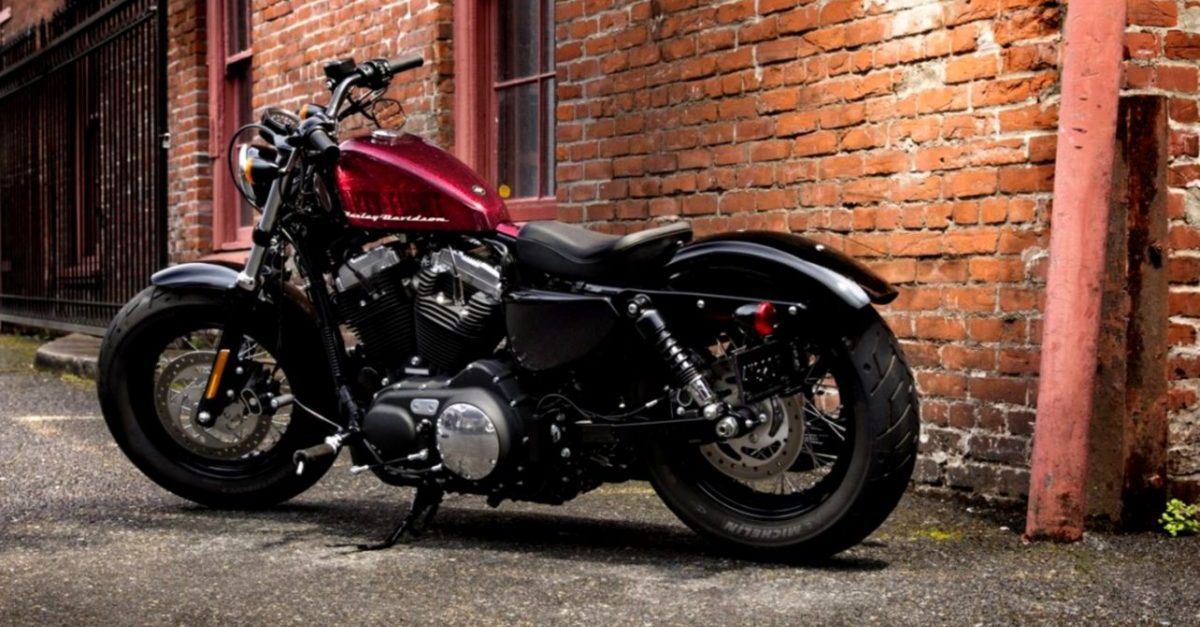 When it comes to the best cruising bikes in the world, Harley davidson has played a major role, and its reputation among its loyal followers speaks louder than television commercials. While all Harleys are beautiful, some models seem to stand out from the crowd. And if you ask Harley purists the reasons for their choices, the answers will be as numerous as the Harley-Davidson models available on the market today.

One of the prettiest and most impressive Harley models is the Sportster Forty-Eight. This motorcycle is one of the best Harley-Davidson motorcycles ever made. Aesthetically, the Forty-Eight is one of the magnificent cruisers ever built. Its lines remind you of old school bobbers and the know-how of a bygone era. And even when parked, you can tell the machine is always ready to kick your ass.

When it comes to badass cruising bikes, the aggressive and low-profile look of the machines goes a long way towards the amount of love the bike receives. Forward controls are a staple in the cruising bike market. They look great on some bikes, and not so much on others.

One of the bikes that looks amazing with forward controls and low handlebars is the Sportster Forty-Eight. They play a major role in the aggressive, low-profile look of this cruiser that all Harley enthusiasts love.

One of the reasons the Forty-Eight looks badass even when parked is because of the big wheels it rolls on. These are also very key styling factors of the bike as they make it very beautiful to see. The 16-inch front and rear wheels give the Sportster Forty-Eight the main feature that makes it so popular among enthusiasts, the vintage, raw and brawling feel.

The large front wheel does make the ride smoother to some extent, and while its success stems from several factors, the massive wheels look deadly on this bike. And people like it for that.

Thus, cruising motorcycles are synonymous with beauty and aggressiveness. And we can’t leave one out when we talk about one of the most popular cruisers of all time, the Sportster Forty-Eight. One of the things that makes this motorcycle very attractive is the tilted mirrors. They make this area around the handlebars beautiful.

RELATED: Here Are The 10 Most Expensive Harley-Davidson Bikes Ever Made

Tucked away under the bars, these mirrors keep the front of the bike very neat and nice. At first glance, it’s like you don’t have a mirror at all, you can only see your hands and the bars.

Older generation Sportsters have always needed suspension work. That has changed, starting with the 2016 Sportster, as the bike has received some suspension upgrades. The 2016 Sportster Forty-Eight came with new cartridge shocks at the rear and improved 49mm forks up front.

While many riders believe the upgraded suspension didn’t do as much as expected, it has significantly improved the performance and handling of the modern Sportster. You can now change direction quickly without having to worry about the suspension.

Cruiser bikes are best known for long distance cruises. You can’t go for miles and miles sitting in an uncomfortable seat. The Sportster Forty Eight’s solo seat is made of leather and offers a comfortable riding experience, even on long journeys. And if the original seat doesn’t feel as good as you want it to be, the aftermarket is full of options to upgrade.

Besides the luxury, the solo seat also plays an important role in the styling of this bike. It’s low, minimal, and maintains that signature line the Forty-Eight is well known for.

5
Its engine is emblematic

When an item has a proven winning reputation, there is no need to think about perfecting it further. This is the case with the engine of the Sportster Forty-Eight cruiser. The Evo engine on this bike has been in use since 1984 and is the most bulletproof engine HD has ever made.

The engine has a four-cam gear train and overhead valve design that dates back to Harley-Davidson’s racing program, and the torque surge you feel every time you twist the throttle is a confirmation of that. .

4
It’s a stunner inside and out

While the Sportster is a beauty to see, the technology used to develop this bike is also quite impressive and has a big influence on the look and performance of the bike.

the Sportster line has been constantly updated over the years, but Harley uses its very advanced technology to improve the bike, not to create fancy gadgets that confuse you.

The bike doesn’t necessarily need to be tweaked to perform well. Still, every biker has their preferences, and Harley-Davidson knows it, which is why they built this cruiser with features that are easy to customize.

The Sportster Forty-Eight comes with a powerful 1200cc Evolution engine and a few other performance features from the factory. If you need anything more than that, all you have to do is order parts online or take them to a customization store and have them built to whatever you want.

The modern Sportster Forty-Eight comes with a mix of new and old. For starters, the Harley-Davidson design team thought it wise to keep the iconic peanut gas tank – a throwback to the old-school Harleys. The gas tank and the aesthetically enhancing graphics of the bike are just a few of the visible features of the 70s.

New parts of the cruiser include the improved seat, suspension, new lightweight mag wheels and brakes. The bike is built with some of the most advanced technological features in the modern motorcycle market. And technology doesn’t create fancy gadgets that get in your way. They’ve kept the lines clean by putting innovation only where it matters most.

The Sportster became popular when the factory hardtail went. And unlike many motorcycle builders who copy old rigs to build new motorcycles, Harley-Davidson didn’t do this; they built a whole new chassis for the Sportster Forty-Eight. The tubular frame follows the regular twin down tube with a yoke-style bilateral swingarm.

For the fiercest riders, the Sportster is solidly built at the factory. The chassis is designed to allow this cruiser to handle lean angles up to 27.1 degrees safely.

NEXT: 10 Custom Harley-Davidsons Designed To Perform As Good As They Look

Sam is a professional internet researcher and writer. He is mainly interested and fascinated by cars and motorcycles. He has been writing on the same subject for a few years. Sam currently works for Valnet Inc’s Hot Cars as a full time contributor. He is also a professional graphic designer, digital marketer and sexual health consultant.