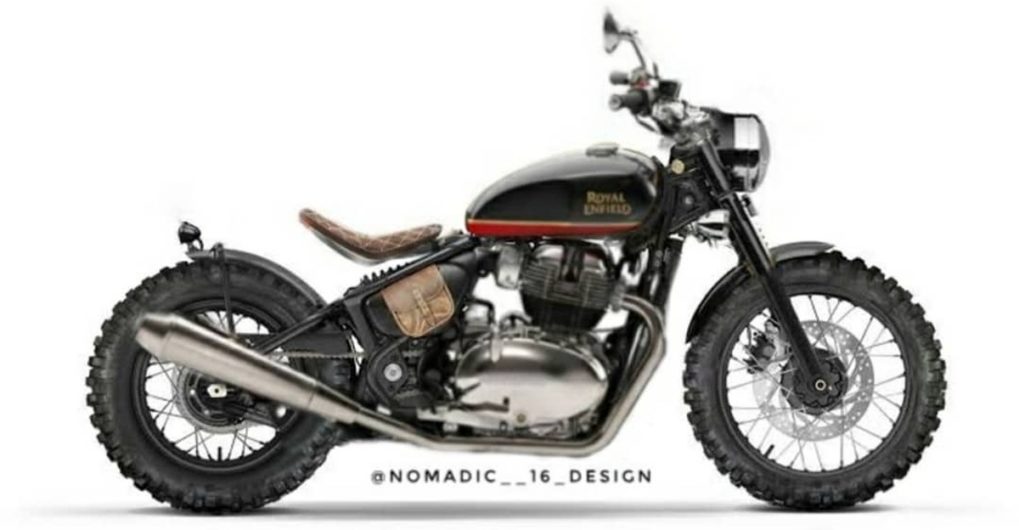 The launch of Royal Enfield took the market by storm with the launch of the 650 twins. The Interceptor 650 and GT 650 were incredibly successful around the world. Many people have converted their Royal Enfield motorcycles to bobbers because Royal Enfield does not currently have a bobber in their lineup. The Chennai-based manufacturer is working on new types of designs for the 650 platform, but none of them are a bobber. So, nomad__16_design on Instagram decided to imagine what a Royal Enfield 650 cc bobber would look like.

Up front we can see that it now uses spiked tires and slightly different spoke rims. There is also a different disc design and a thinner front fender. The headlamp is a circular unit and mimics an old-fashioned design. It is similar to the ones we saw on the Royal Enfield Classic. There are also no fork gaiters on the render as the 2021 Interceptor now comes with fork gaiters from the factory.

The side panels are different and shaped like a capsule. There is also a single saddle in a different brown color, as we have seen on the bobbers. The rear light was mounted on the rear fender. Interestingly, we don’t see any flickering on the render. There is also no traditional license plate holder but could have been mounted on the left side of the bike.

The Interceptor 650 is powered by an air / oil-cooled 648cc parallel twin engine. The engine produces 47 PS of maximum power and a maximum torque of 52 Nm. It is the most powerful and refined engine that Royal Enfield has ever produced. It is mated to a 6-speed gearbox with an assisted slip clutch.

The overall design elements of the bike are very retro and therefore appeal to most people. Where the Interceptor 650 is a roadster, the Continental GT 650 is a Cafe Racer. It is currently Royal Enfield’s flagship motorcycle and is one of the nicest motorcycles you can buy.