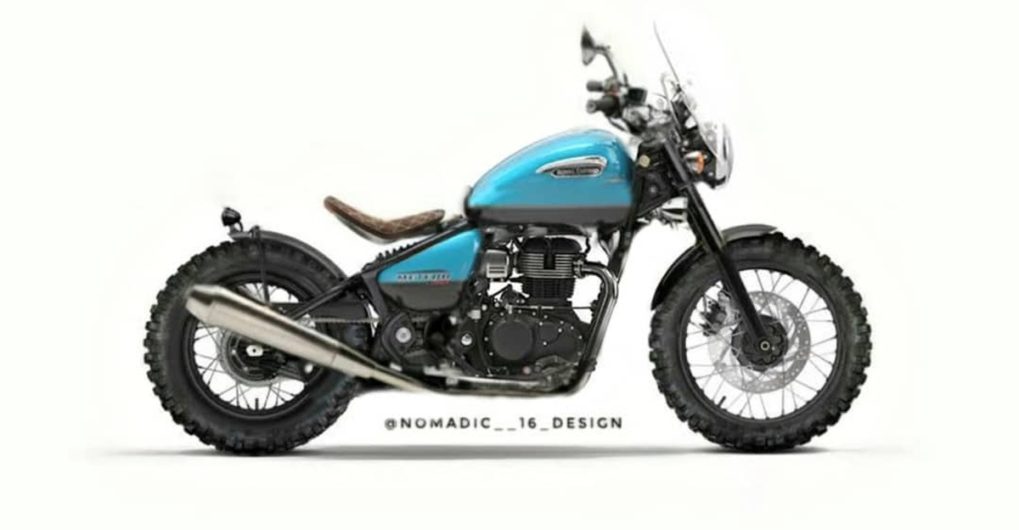 Royal Enfield launched the Meteor 350 last year and it has been very well received by enthusiasts and customers alike. Currently, the Meteor 350 runs counter to the Honda H’ness. However, Royal Enfields’ main rival is Jawa, which also makes motorcycles with a retro look. Jawa’s flagship motorcycle is the Perak which is a Bobber and currently it is the only Bobber available in our country. So, an artist by the name of nomadic__16__design on Instagram decided to convert the Meteor 350 to a Bobber.

The Meteor’s bobber style is quite appealing. The variant that the artist has modified is the Supernova which is the high-end variant. The artist carried the side body panels, handlebars, windshield, turn signals, headlight, engine and fuel tank of the original Meteor 350.

We can see that the front of the bike is quite similar except that it rolls on wire wheels with studded tires. Then we can see the same teardrop shaped fuel tank that is finished in a two-tone paint scheme with the Royal Enfield badge on it.

The engine is blacked out which is really nice and the tailpipes are similar to that of the Interceptor 650. The original Meteor exhausts are finished in chrome or matte black depending on the variant. Also, they aren’t swept up as we see in the render, but rather straight. Royal Enfield now also offers its own homologated exhausts for the road.

Then we can see the unique floating seat finished in brown. At the rear, there is now a single mono-shock cleverly hidden under the saddle. The original rear suspension comes with twin-tube shocks with 6 levels of adjustable preload. The circular brake light was installed on the rear fender. The rendering on the rear indicators is missing. There is also no license plate holder visible in the render. It is possible that it has been moved to the left.

It features a 349cc air-cooled, long-stroke single-cylinder engine with a counterbalancer to smooth out vibrations. It produces 20.2 hp of maximum power and a torque of 27 Nm. It is mated to a 5-speed manual gearbox at gear changes.

The Perak comes in one variation and one paint scheme which is matte black-gray. It is priced at Rs. 1.99 lakhs ex-showroom. Being a bobber, he has no direct competition at the moment. It has a single seat and two exhausts although it is a single cylinder engine. However, it is a more modern engine because it has liquid cooling and is 334 cc. The engine produces 30 hp of maximum power and 31 Nm of maximum torque. It is mated to a 6-speed manual gearbox. Thus, it is more powerful than the Meteor 350 but it is also much less practical.

Triumph Bonneville Bobber: what else can you buy for this price?

This Royal Enfield 650 Bobber is a vintage-inspired wonder