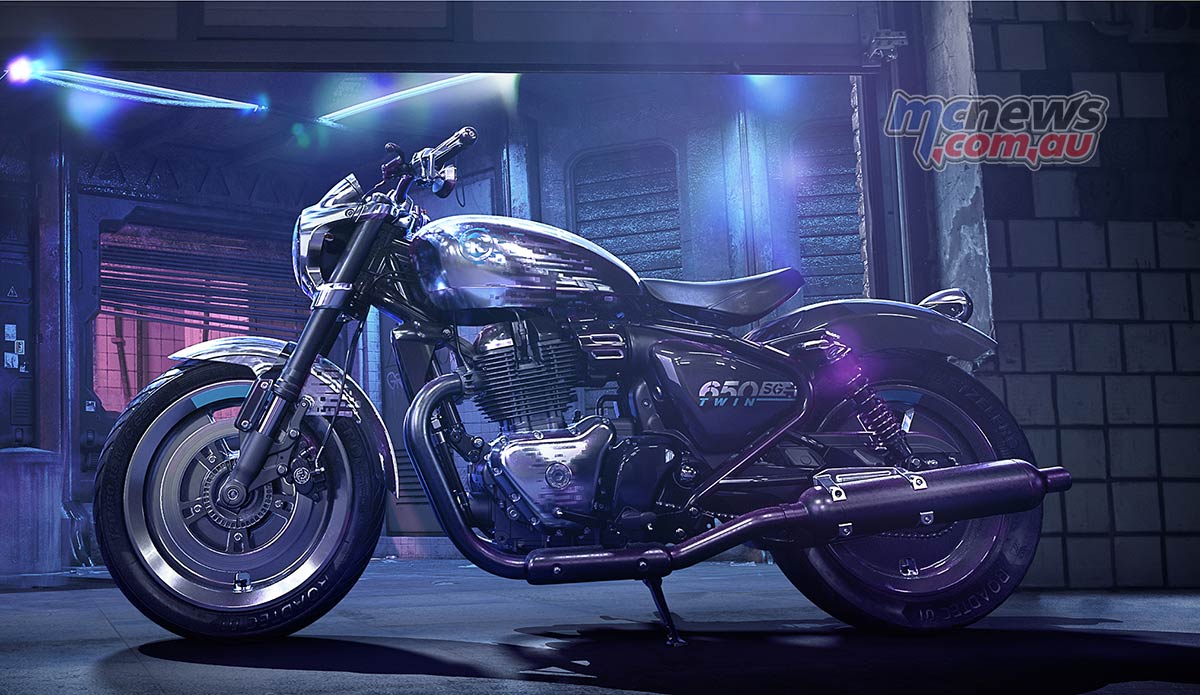 The SG650 concept is the result of a challenge to the Royal Enfield industrial design team by Mark Wells, head of design at Royal Enfield and the man responsible for leading the model / design strategy for Royal Enfield at over the past seven years.

Royal Enfield calls the SG650 a â€œconceptâ€ model, but you can bet your last rupee that it will hit the market in the next 12-18 months, if not sooner.

“We are a company in transition – such a long representation of the analog age and developing new products that keep that same soul pure while being fully integrated into the digital present. To celebrate this, we wanted to develop a project that really gave our design team an opportunity to creatively expand. The goal: to build a unique concept bike that pays homage to Royal Enfield’s rich history of custom motorcycles, but that doesn’t get crowded in the past. A neo-retro take on that pushes the boundaries of what a Royal Enfield motorcycle could look like, but still celebrates that iconic Royal Enfield DNA.

â€œToday’s advancements are often inspired by the imagination of the past – the cell phone, the smartwatch or even space travel. This desire to look to the future with optimism and imagine the possibilities is fundamental to the advancement of our culture. And so we started this concept with a context rather than a question – imagine a world in the not-so-distant future and our brand’s place in it. A cyber, neon-saturated urban jungle has taken shape – where the old meets the new in a tangle of concrete, metal, bright lights and dark streets, where analog and digital intertwine and blend – a setting that felt both familiar and alien to us, and in so doing, fostering an environment that would force us to think differently about how we approach the aesthetics of a #royalenfield motorcycle.

“We believe that the resulting motorcycle concept, first unveiled at EICMA 2021, inhabits this world fantastically well and offers something very new, very original and entirely unique to fans of the brand and to motorcycle enthusiasts alike. The design team has done an incredible job keeping the analog soul – those classic Royal Enfield design lines and nuances – subtle nods to the past – while creatively pushing the boundaries of what the Royal Enfields of tomorrow could represent conceptually in terms of form and function.. “

“We are truly excited to unveil this concept and write another chapter in the rapidly evolving history of Royal Enfield design. It’s always exciting to design a â€œwhat ifâ€¦â€ scenario, and the brief to create a bike that would both be recognizable to the Royal Enfield but at the same time push what could be a Royal Enfield was a real challenge. This was a wonderfully collaborative and rewarding project to develop, as it required the creative input of many different aspects of the design team – from industrial design to color and graphics finishing and CGI – each contributed a piece of the puzzle to bring this other world to life.

â€œThe key concept of transition is conveyed throughout the bike; from the choice of aesthetic finishes, to the materials we used. From the heritage-inspired polished aluminum front end to the futuristic digital tank design, it was about bringing the old and the new together and creating something timeless.

â€œThere are some really special elements about this bike that are a first for a Royal Enfield concept – a lot of the components were either individually built, one time only or designed exclusively for this bike. The reservoir was CNC machined from a solid block of aluminum, as were the rims with integrated ABS, custom designed brake calipers and dual front brake discs. Upturned forks, integrated aluminum top pod / pod unit, and extra-wide low-rise bars with all aluminum switch cubes all add elements of originality and design progression to the concept – while the two rear shocks, mounted on the classic chassis buckle, hand stitched black leather floating solo seat is a clear nod to our past. Graphically, the black 650 Twin engine and exhaust system complement our imagined near future, while polished aluminum shapes transitioning with a ‘digital transformation’ graphic across the bike are a testament to the brand’s progress. We are delighted with the end result and are convinced that it brings something completely new, on the occasion of our 120th anniversary, to the ever-evolving history of Royal Enfield.“