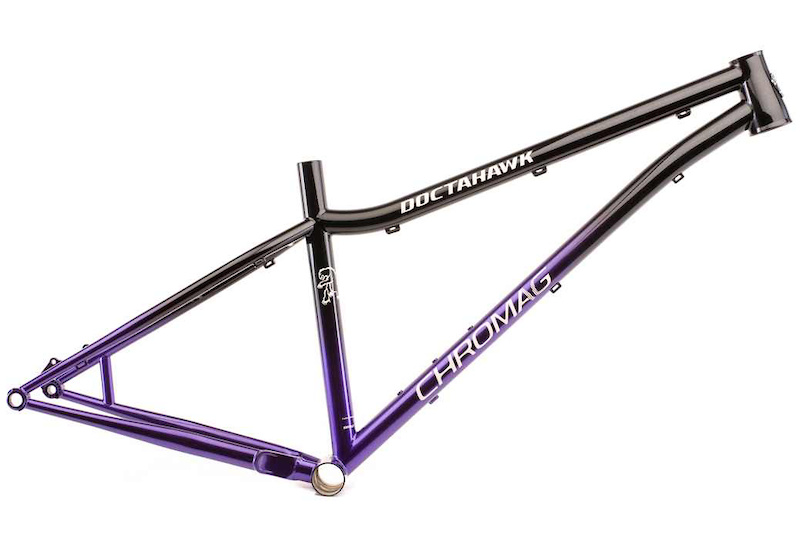 Remember that wild Chromag hardtail that debuted a few days ago? You know, the one with the chopper-esque head angle that makes most downhill sleds look old-fashioned? While the Doctahawk is built by Chromag, the long, loose geometry that sets it apart was designed by Clark Lewis, a Whistler inhabitant known for his prowess on a hardtail. The concept and benefits of a longer, more relaxed geometry have been discussed a number of times, but things change a bit when you start applying those same principles to a hardtail.

Below, Clark explains the reasoning behind the geometry of its namesake.

My name is Clark Lewis and I am an emergency physician and have been riding hardtail with the Chromag team in the Whistler area for fifteen years. I designed the geometry for the new â€œDoctahawk,â€ which is a PC version of my well-deserved nickname, Doc Tomahawk. I’ve been riding it since last spring, alongside two other Chromag riders on similar frames, over the gnarled, steep, hilly, rugged and difficult terrain it was designed for.

There seemed to be a lot of interest and misconceptions around the geometry of the Doctahawk (pictured below) that I wanted to address here.

Keep in mind the difference in “dynamic” geometry between a hardtail and a full suspension bike. I would say I’m not far from the modern and longer equivalent full suspension platform. Only the front sags on a hardtail, so when riding the SA and HA are steeper than their static numbers; Much steeper descent in steep terrain, but the rear cannot sag when climbing.

On a full suspension bike, where the rear sags a bit more than the front, the SA and HA become slightly looser on flat terrain, slightly steeper descents, and often much softer climbs. Therefore, to achieve similar dynamic ride geometries, a hardtail can get away with a looser SA, but needs a much looser HA.

In other words, the Doctahawk’s 77 Â° SA and 62 Â° HA have a similar dynamic to that of the Pole Machine (79 Â° SA, 64 HA Â°), which I rode briefly last summer and which I loved. It’s quite different from my friend’s Nicolai Geometron which was installed with 77 Â° SA and 61 Â° HA (I wanted a steeper SA, but found the HA just ridiculous, sometimes funny, but just a handful to other times).

Also, keep in mind that the dynamic feel of any bike is a result of the overall geometry, as well as many other factors (tires, suspension setup, stem length, handlebar width, riding style. , etc.). Two bikes with disparate geometry can have a similar dynamic feel, while others with similar geometry can feel very different. Static numbers are only one part of it.

1. A stiff STA and long reach will keep me in a more powerful pedaling position and lessen front wheel lift on steep climbs.

2. The â€œcockpit length,â€ aka the effective top tube length, will be â€œnormalâ€ despite the long reach, as the stiff STA brings my butt closer to my hands while sitting.

4. The new Lyrik 180 is only slightly taller than the old 160, so I should be able to run it with a bit more sag to get the same dynamic ride height (i.e. the height of bar when you are on the bike and the fork is sagging).

5. A shorter offset fork can help ease front wheel slippage on steep climbs with such a loose HA.

6. A long wheelbase will require a more dynamic entry to get around tight laces.

This bike climbs ridiculously steep terrain without any front wheel elevation, even with a 180mm fork. I don’t feel “stretched” even with the extra 50mm reach (compared to my previous bike), as my butt is more forward. I had planned to ride with a short stem, but after trying a 10-60mm stem length I opted for 50mm to increase the front wheel pressure when cornering on soft ground.

Interestingly, there was no difference in climb performance between the two versions of the frame with a 20mm difference in chainstay length (I spent half of last year on each frame and j I preferred the longer CS version mainly for the descent). The shorter offset fork calmed down the front wheel drift, but I didn’t find the longer offset fork awkward, even with the front wheel so bloody up front. We’ve got a lot of awkward tight laces that were easily managed with wide steering and the odd â€œliftyâ€ front wheel for really tight turns.

A negative; there is a bit more hand pressure on long, gentle climbs or flat terrain, but I got used to it, especially after moving to a higher bar.

1. I want a shorter ST length to make room for a 170-200mm dropper post to fully spread the saddle for very steep terrain.

2. A longer reach shifts my weight forward, shifting the weight off the rear wheel, which is useful for added comfort on a hardtail in rough terrain.

3. I want as much travel as I can up front to make the â€œforkâ€ while going down more comfortable. The additional mid-stroke support of the new Lyrik will allow this without excessive diving.

4. I want a much looser HA to feel comfortable riding in that more aggressive forward attacking position without fear of going over the bars, especially with all that moving to go.

5. The long wheelbase will help keep the bike quieter over rough and fast terrain.

6. The front and rear central “imbalance” is less of a problem in real life than it is for some people on the interwebz, as is the imaginary “problem” of disparate front and rear shifts (if you are driving both hard bikes and squishy bikes you know it’s silly They really don’t feel that different, and the hardtail just needs more energy / input / finesse).

7. Longer reach can make wheelies more difficult, but I can mitigate that with good technique and relatively short chainstays.

This bike is a monster truck on the descents, and it is much more comfortable at speed and on rough terrain than my previous hardtails. To get the most out of it, I ended up using Minion DHF 2.5 ” DH casing front and rear tires all summer and just managing the extra weight on the way up. The rear requires less energy to control with my weight more on the front. Proof of this came in the form of final tire pressures – I ended up at a nearly balanced 22 psi / 23 psi front end, instead of my previous 20/30; a big difference in comfort and traction. The new Lyrik shock absorber stands high in steep terrain. I have passed the bars zero times; he never even felt close. The Wheelies were a bit tougher, but I quickly got used to it.

On the negative side, the bike MUST be driven aggressively and with a lot of pressure on the front wheel, otherwise it will slip out of your way and you will lose traction. There were some scary times in the beginning where I got lazy and â€œsat downâ€ to try to restâ€¦ Bad idea. My favorite trails to surf usually require your full attention anyway, and I’m a trail “smasher” at heart, so that’s fine for me. This puts more stress on your upper body, so do a few extra pushups.

Maybe the only thing I would change is a taller head tube (over an inch of spacers under the stem is ugly), and this spring I’ll try an Angleset to see what 60-61 degrees looks like. … Because why not? 62 feels “right”, but who can say that the limit is not a little further.

Yezdi 250 transformed into a bobber by Indi Custom Garage

Pinkbike Poll: Do you ride a hardtail anymore?