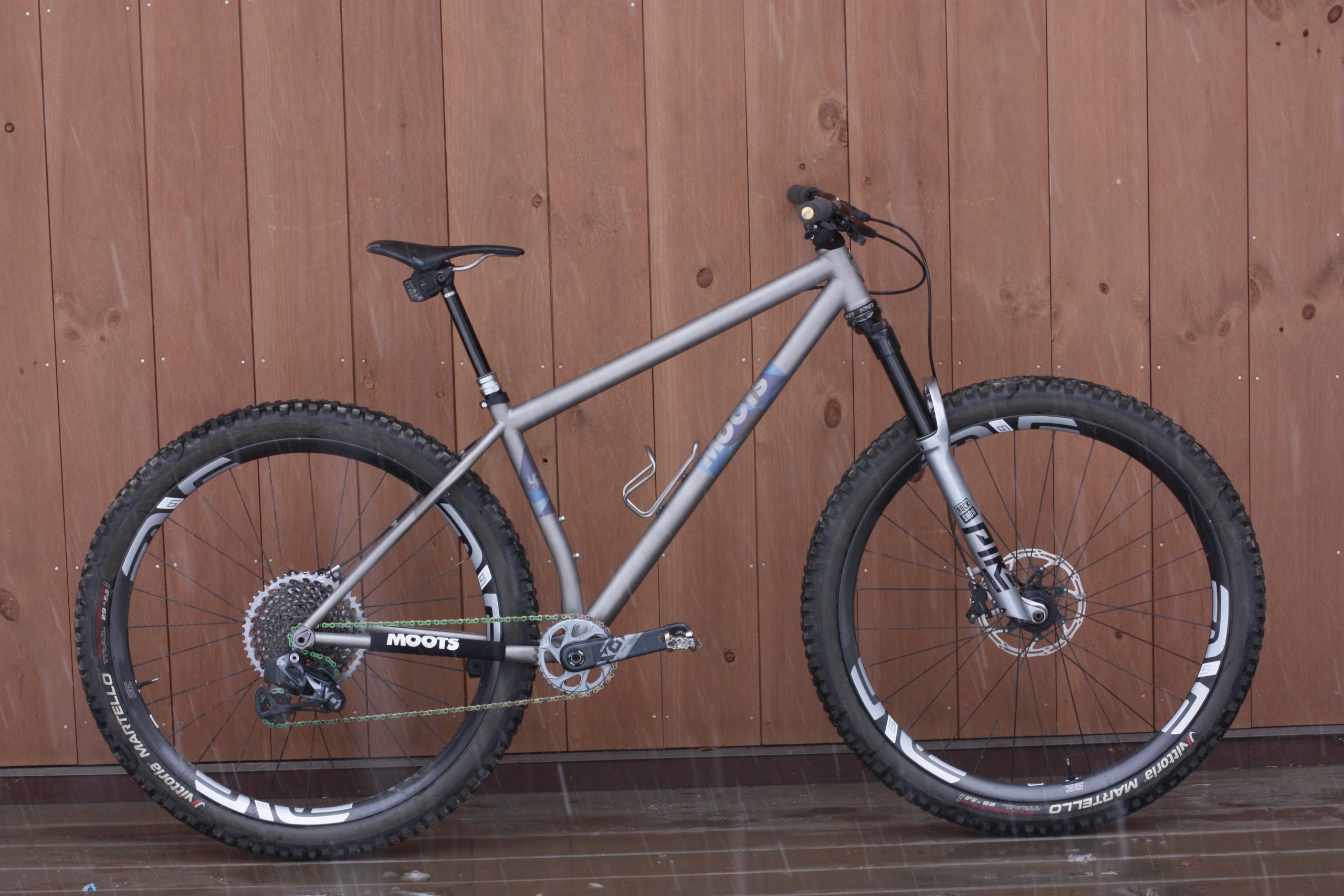 The Moots Womble: a titanium semi-rigid designed to tear [Review]

It didn’t take many laps on the new and slick Moots Womble titanium hardtail to notice that everywhere I went other riders – and especially those of a certain age – were giving eye to the eye. ‘lift to my bike. When I sent the Womble out for a try with my 60-year-old neighbor, it didn’t even reach the trailhead until it encountered a friend (and a peer) who rolled down their window to say hello – but didn’t. couldn’t help but add, â€œWow! Nice bike! “When Chris returned the bike to me, he raved about its precise steering, climbing prowess and stiff, rocket-like feel, but summed up his review as” but hey, it’s a Moots. not to like?”

It’s a well-deserved reputation. For the past 40 years, Steamboat Springs-based Moots Cycles have produced meticulously designed custom titanium racing bikes. They’ve worked hard to build a legacy with their made-in-the-USA craftsmanship, and they too know that their riders tend to be those who have been on this earth for at least as long (if not longer) as Moots has been in business. (Namely: Womble’s slogan is “A New Bike for Old Souls”.)

But as a woman in her thirties, I’m not quite there yet. And I would also say that this Moots isn’t just for old souls – it’s a modern mountain bike that really rocks, both uphill and downhill.

Riding a hardtail – not to mention a beautiful titanium hardtail with anodized and sandblasted details – is enough to cause a double ride here on the rocky, entrenched terrain of Vermont. While machine-built flow trails slowly creep into our woods, much of the driving here is still old-fashioned rake-and-ride. Coming from a plush Stumpjumper I had set up in a ridiculously close to ‘sofa mode’ way, I didn’t expect to find much to like in a hardtail on a tight, twisty, bumpy singletrack. , even if he was premium titanium construction.

And yet, on my first try on the bike, I ran over it. But first, a caveat: although I’m comfortable on a mountain bike and ride just about anything, I’m not a flashy cyclist, and I I’m not blazingly fast either, despite years of road racing and cyclocross. And yet, I’ve picked up handfuls of personal bests, Strava cuts, and even a QOM on some popular segments that I ride all the time. And while I thought a hardtail would be faster on the climbs, oddly enough, the segments I caught were all downhill. So, what gives?

An update to meet the geometry of modern mountain biking

For answers, I turned to Nate Bradley, Product Development Manager at Moots Cycles. As well as running the tab store in Moots, he also ran the Womble. Bradley, I thought, could tell me more about what makes this bike special.

For starters, the Womble is unlike anything Moots has built in the past. It’s longer, looser and, paired with a rugged Rockshox Pike Ultimate 140mm fork and 29 Ã— 2.5 “tires, it’s ready to rip. Up to the Womble, the most aggressive bike in the lineup Moots was the Farwell, with its 120mm fork and 68.5 Â° head tube angle. In contrast, the mid-size Womble I tested has a 67.2 Â° head tube angle and a seat tube angle of 75.7 Â° (at 25% sag), which is a significant advance towards modern mountain bike geometry graphics.And with its lower and longer geometry paired with the 140mm Pike , I was able to roll it downhill with confidence and speed.

But almost every bike I’ve ridden recently has had this same kind of long, loose geometry, and at least 130mm of fork travel. So what makes the Womble feel so good downhill? Well, Bradley had a (admittedly ironic) theory: “simple equals fast” and that eliminating the rear shock allows you to focus on the rest of the race. Maybe he’s right. But I also did some front-center math and found that the Womble measures 740.7mm from the bottom bracket to the center of the front wheel axle. My Stumpy is only 736mm which means the Womble is longer than my track bike. Plus, I think what makes the Womble eat on the descents is the same thing that makes it a rocket on the climbs – and that has a lot to do with its tail.

One of the things I liked the most about the Womble was its quick acceleration on uphill turns – or, well, on anything with an upward slope. Used to my rear suspension gobbling up my watts on the climbs, I loved the immediate gain of a well-placed pedal stroke, which, properly timed, could pull me into a corner with eagerness.

And yes; most hardtails are good climbers. But the Womble is exceptionally good, due to a noticeably curved seat tube which allows for bigger tires, a stiffer and shorter seat tube and short chainstays. It also has a sporty and somewhat playful vibe that stays steady at high speed (hence those downhill QOMs, I guess). Before I started cycling I was riding a horse, and this bike rides just like a well-trained tricks pony: all of its power is neatly coiled underneath, ready to explode as soon as you give it the green light. It’s extremely rewarding to experience the power that a single stroke of the pedal gives as it propels you forward on the trail.

This curved seat post also fixed the issue of clearance for the tires and dropper post, allowing for an aggressive 2.5 inch Maxxis Assagais (although my tester has 2.6 inch Vittoria Martellos) and count- Rockshox Reverb AXS drops which tidy the saddle out of the way. when browsing the technical sections.

The last thing that sets the Womble apart from the competition is that it’s a Moots. After 40 years of work almost exclusively on titanium (they dabbled in steel until 1991), the Moots team has complete mastery of the material. But for the Womble, Bradley and his team have deviated from the norm by releasing an exclusive double-butted tube for the top and bottom tube with a larger diameter than anything they have ever produced. The material is thicker at the head tube for added strength, but narrows down the middle and sides, which Bradley says helps reduce weight and vibration. (As the vibrations move through different wall thicknesses, the frequency changes, damping the reverberation you feel).

My only other hardtail is a home-made aluminum hardtail with a 100mm fork, so it was difficult to do an A / B comparison on the new tech. But overall, the Womble feels light, playful, and ready for a mega day in the saddle or an epic bike trip. This is the platform I chose when I planned a big multi-track system day and when I was riding dirt roads. It is also the first bike on which I crossed a table jump line.

The Womble I tested was Moots premium construction, with a SRAM X01 Eagle AXS groupset (dedicated 1 Ã— 12 with room to run a 32T chainring), SRAM DUB threaded bottom bracket, and SRAM G2 Ultimate brakes. . With Chris King hubs and headset, an oil-proof chain and Moots alligator head badge perched up front like a figurehead on a Spanish galleon, this bike has flair, in particular. in the new microblasted â€œFacetâ€ finish, inspired by artists like Paul Klee and Bridget Riley. This is no exaggeration, however; like most Moots models, the Womble is classy.

Would this bike be as fun to build without its premium components and in-house machined frame fittings? Yes. Yes it would. Would other bikers still turn their heads to take a second look? Yes. And it’s definitely worth considering a frame only, if you’re curious. Because while this bike ticks all the boxes as a lavish midlife crisis, it’s also beautifully built and built to last. And that’s precisely why riders love Moots: they build bikes you’ll hang on to for many years to come. In creating the Womble, Moots went out of their way to create what they think a modern hardtail mountain bike will look like in 2024 – not what they think Moots riders want in 2021.

And there’s a lot of value in taking that perspective to building bikes. It might not be the trendiest and most progressive bike on the market, but it’s still a high performance bike, extremely enjoyable and built to last. It’s also precisely representative of what Moots has done so well over the past 40 years, and what they continue to excel at: making beautiful, high-end bikes that last. It’s also a lot of fun to ride, especially knowing that you’ll be putting a leg on it for years to come.