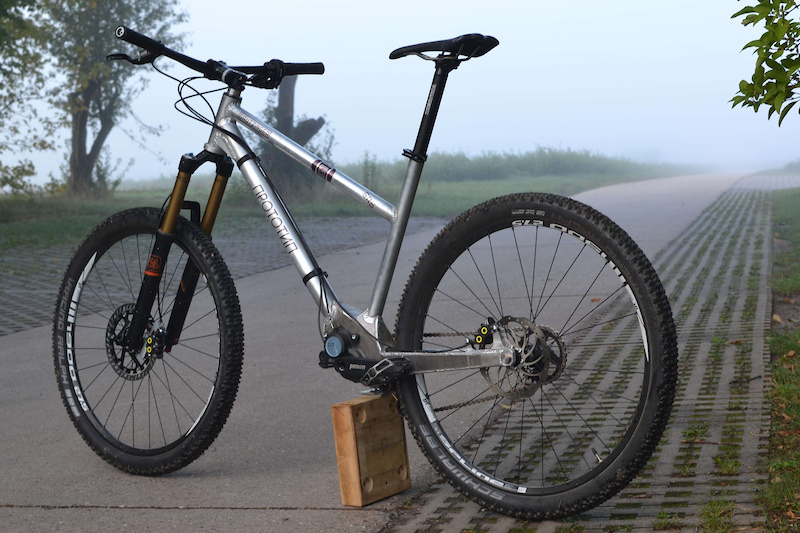 When Karl Groetzinger set out to design his first fully-built frame design, he had one goal in mind – to make it unlike anything out there. Karl started designing bikes 10 years ago, but didn’t have the facilities to build them. Now 26, he graduated in Mechanical Engineering from the University of Stuttgart, learned aluminum welding on his own and was able to bring his visions to life.
Details

While most manufacturers use metal tubing for the chainstays and join them to a gearbox housing with a weld, Karl uses bent sheet metal all the way down the chainstay and into the BB / bracket for the gearbox. .

The first question we will surely ask ourselves is: “Isn’t it going to break?” Well, that was the big challenge for Karl; if he wanted to do something unique he was going to make sure that worked too. By using sheet metal to integrate the gearbox, it was able to distribute the loads and not have a weak joint between the shrouds and the BB area. Along with this unique construction method, it also makes sure that the area around the gearbox and chainstays has a lot of metal so that everything is oriented as it should. The bent metal cubes he used for the seat stays have a profile of 50 x 20mm and a wall thickness of 3mm, which is about double the thickness of conventional aluminum tubes used on mountain bike bases. .

To prove his design, Karl used a frame-mounted strain gauge and a 3D scanner to measure how the absence of a seatstay affects the bike. He concluded that there were “only slight plastic deformations”, but this is something he intends to correct in the next model by using an even larger 7000 series aluminum alloy. resistant, which has a yield strength almost twice as high. The next version will also feature a belt drive instead of a chain and potentially a gusset between the seat tube and the top tube.

The attention to detail is amazing, including the machining of these brake mounts after welding to ensure they were perfectly aligned.

Karl uses a strain gauge with measurement sensors on the cantilever to learn more about its design and how it can be improved for version 2.

So what will be the downsides of this design? Well, the extra material needed to strengthen the basics doesn’t come without a weight penalty. The frame currently weighs 2.5 kg (5.5 lbs), which puts it about 200 grams (0.5 lbs) more than, say, the Argon AM Pinion from Nicolai. The complete protector construction that Karl has selected here tips the scales at around 15 kg (33 lbs). We’re also not sure how the design will react to torsional forces when the bike is heavily stuck. Really, none of this matters. It was not a performance driven design – Karl set out to create a bike unlike anything seen before and it only takes a glance to know that he has succeeded.

Karl gets more information on the physics of the bike from a 3D GOM scanner.

The bike is currently a one-off design exercise although Karl was surprised at the amount of interest and might consider doing a production run if it continues. He currently designed the frame around its own large proportions with the intention of fitting it with a 140-150mm fork and using it as a mountain bike. No geometry information is currently available. The best way to follow the project is to follow Karl on Instagram.