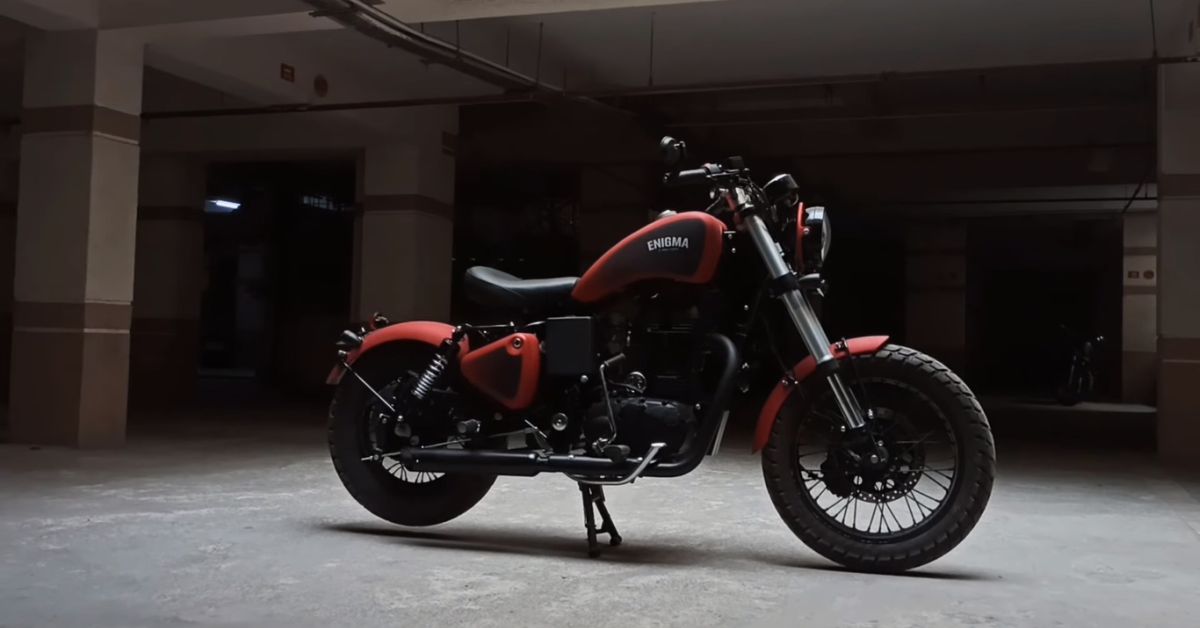 Royal Enfield motorcycles are one of the most popular two-wheeler brands in India and across the world. The manufacturer is known for its modern motorcycles with a retro look. It is a very popular bike among bike modifiers and we have seen several examples of it in the past. Hyderabad based MOtorcycle Revolution Customs or better known as Eimor Customs are popular in this field and we have featured several of their designs on our website in the past. Here we have a video where a Royal Enfield Classic 350 motorcycle has been completely transformed into a bobber. The motorcycle is called Enigma.

The video was shared by East India MOtorcycle Revolution on their YouTube channel. In this video some of the modifications to the bike are mentioned. Starting at the front, the telescopic front forks were replaced with a USD unit. This gives the bike a beefier look up front. The front wheels are 19-inch units and they are blacked-out steel rims and spokes.

As we progress, the stock Classic 350 motorcycle headlights have been replaced with an aftermarket LED unit. The whole bike is finished in metallic red and black. The instrument cluster from this motorcycle has been retained, but the hood around it has been removed. The stock fuel tank on this bike has been replaced with a bespoke unit. The fuel tank design is actually inspired by the Indian Scout bobber motorcycle. The handlebars of this bike have also been customized.

The engine and the area around it have been completely darkened. The side panels, battery box and tool box of this motorcycle are original. The bike now looks slightly stretched compared to the regular version. That’s because the swingarm on this bike has been lengthened by 4 inches. The rear gets 15-inch blackened steel rims with a thick-looking 140mm section tire. The rear receives a mudguard that completely hugs the rear tire. The rear lights have a minimalist design and are mounted on the fender.

The stock turn signals on this bike have also been replaced with aftermarket LED units. In this video, the bike is shown initially with a passenger seat. The rear passenger seat is designed so that it can be removed when not in use. After removing the passenger seat, the rider’s custom suspension seat can be seen in the video. The general position of the motorcycle changes immediately after the removal of the passenger seat. It looks more like a bobber-style motorcycle now.

It seems that no modifications have been made to the engine of the motorcycle. The exhaust of this motorcycle has also been finished in black. The front gets disc brakes while the rear only gets drum brakes. The work done on this motorcycle looks very neat. Royal Enfield are currently working on a variety of models and one of them is actually a 650cc twin cylinder bobber motorcycle. It has been spotted several times and the launch is expected to take place this year.

How to Get a Debt Consolidation Loan for Bad Credit