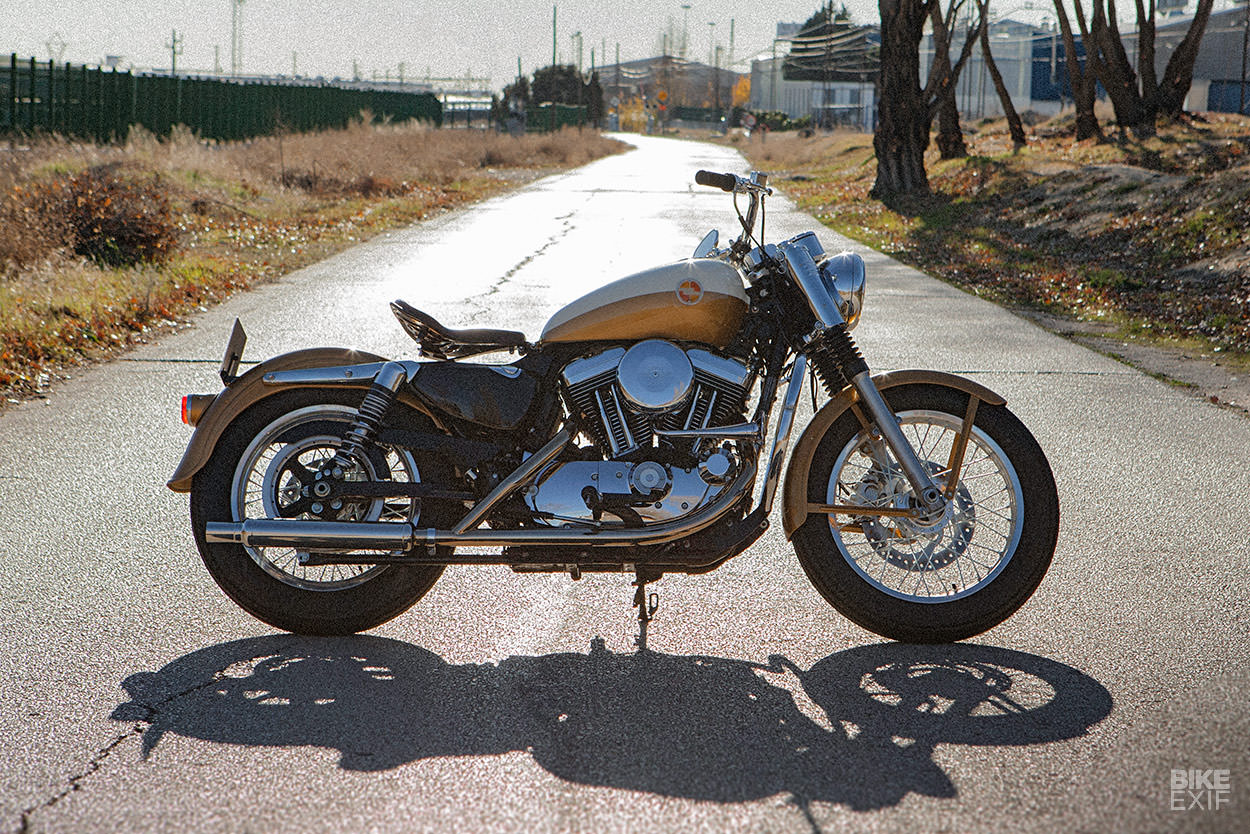 This vintage ‘1957 Sportster’ is actually a brand new bike

Last year the Harley-Davidson Sportster turned 60. It is an extraordinary stage, only the Royal Enfield Bullet having a longer uninterrupted pattern.

Surprisingly, Harley hasn’t made much noise about the Sportster’s 60th anniversary. But the Spanish manufacturer EfraÃ³n Triana has decided to celebrate it in a most unusual way. With the blessing and support of Harley-Davidson EspaÃ±a, he took a 2016 Sportster model and reconfigured it to look like a late 1950s Ironhead (below).

It is not an easy task, but EfraÃ³n had one factor in his favor: the development of the Sportster has always been gradual.

Like Porsche, Milwaukee prefers evolution to revolution. Just as you can see the connection between a 911 built in 1963 and one in the showroom today, there is a clear lineage between a 1957 Sportster and the current model.

EfraÃ³n’s idea was to build a Sportster with all the charm of a 1950s model, but the reliability and functionality of a modern bike.

Because, as we all know, classic bikes are great, until you find yourself spending more time with your hands in the toolbox than on the grips.

EfraÃ³n had the skills to make it happen. He is best known for his involvement in Cafe Racer Dreams, the Madrid store that set the tone on the custom scene a few years ago.

CRD has since changed hands, and EfraÃ³n has now returned to his original solo workspace, UFO garage.

The donor bike is an XL1200, and the brakes and suspension are intact. They might not be as good as a Brembo and Ã–hlins setup, but they are much better than the drum brakes and tinny telescopic handlers fitted to the Ironhead Sportster.

The wheels are custom recreations of the early originals, 19 inches up front and 18 inches in the rear. They are protected by replica XL wings, which EfraÃ³n enlarged by hand. (And for once, Firestone Deluxe tires are just right.)

The bars are handcrafted to evoke the shape of the originals, and the modern Sportster speedometer has been modified and relocated to match the classic vibe. At the top, a Hella headlamp, built into a first-generation housing.

The exhaust system was custom made by the [details] GR specialist, and admirably follows the lines of the 1957 original.

But the air filter cover, however, is a vintage Sportster item, modified to fit the current fuel-injected Evolution engine.

Directly above is an original 1957 Sportster tank, subtly modified to fit the modern frame and plumbing introduced by Milwaukee in 2004. The tank badges also look entirely original, but EfraÃ³n had to make them by hand. .

It also made a new carbon fiber base so that the 1957 tractor-style seat and bracket would fit the new frame.

EfraÃ³n himself applied the stunning gold and white paint scheme. It’s similar to the paint of the 1957 Sportster at the Harley-Davidson Museum – a pre-production model – and a popular choice for conservators. (Although accepted wisdom says this was not a color scheme offered on full production models.)

If this Sportster passed you on the road, you’d be hard pressed to say it’s a modern machine. He’s a very smart optical illusion. Maybe Harley-Davidson should consider producing a similar machine on its own, since 2018 marks the Motor Company’s 115th anniversary?

Do I want a Buell XB12S or a Harley-Davidson XR1200 Sportster?

Review: The Pace RC127+ is a steel hardtail designed around New-School 2.6-inch tires