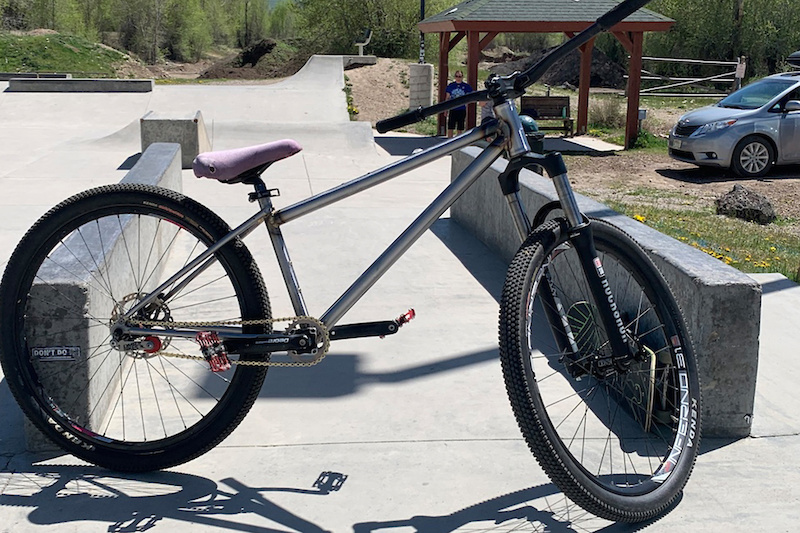 Transform an old hardtail into a custom mountain bike

The first hurdle I encountered came quite quickly. I knew building a frame would be super cool; however, my project must have meant more to him. This is where the idea of â€‹â€‹changing the geometry of an already built bike came about. I wanted to prevent at least one bike from ending up in the landfill, so I bought an old Diamondback hardtail from Facebook Marketplace for $ 25, and the journey began.

This bike was heading for the dump until I entered.

I learned to TIG weld with a local welder and machinist, Mike Barklow https://www.instagram.com/metalmindset/. I would go to his workshop after school and practice welding, switching to a thinner and thinner material. Overall, I spent a day, 24 hours in total, learning how to TIG weld. It was a very critical part of the project, as I had never welded before that. I learned a lot of things! Each week we would work on a new technique, or switch to a new piece of metal.

Fictitious head tube I made while practicing

Back to the bike. I stripped the $ 25 bike of parts and paint and started cutting out the frame.

Stripping and preparation for cutting the frame

This process of cutting out the frame was easy, but nerve-racking as I didn’t want to spoil the first stage of construction. I decided to keep the back end together to help reduce the welding I would need to do. It ended up being a huge time saver and added a bit more character to the bike.

Now let’s move on to the frame building itself. I was lucky enough to have the help of the very talented Wes Van (https://www.instagram.com/wildflowerbicycles/), during the frame construction part. We designed a BikeCad frame that would work for the already small tube lengths, a dirt jumper. We then started to build. The back was easy. we bent the seatstays to match the cut seat tube. We ended up brazing the junction of the seatstays and seat tube due to the difficulty in mitering the seatstays as they were still connected to the rear triangle. It was my first time doing soldering, and it was pretty fun. I know my solder isn’t perfect, but that’s the bike theme.

Brazing the rear triangle together.

Quite shabby, but not too shabby for the first time Brazing.

After the rear part was finished, we cut the top tube and mitered bottom tube. I used the original down tube as the top tube on the dirt jumper. Wes had a dented down tube that I was using and bought a new head tube. The miter was super easy thanks to the tooling that Wes has.

The tab and the frame in the template.

After the tab was cut, I nailed all the tubes in place and started soldering. As expected, I made a lot of holes in the frame (whoopsies), but that’s just the process of welding thin materials. I patched up some of the smaller holes, and Wes came in as a cleanup crew and patched some of the bigger holes I made.

Putting on the brake hanger seemed easy enough, but since we didn’t have a template for the quick stalls, the position is a bit off. Right now I’m just running without brakes which is super fun but scary at first. We ended up reaming the head tube and calling it good. I put a clear coat on the frame to show the sub par welds and the franken-bike feel.

I built the bike using a mix of parts from the original bike, parts I had at home, parts from Cycle-Z (a bicycle repair club at my school), and new parts. I tried to keep the recycled theme throughout the bike while building it.

From this, to that

Overall I spent 49 hours and about $ 250 in total turning this dump bike into a snappy jump bike. While keeping a single bike out of the landfill doesn’t have much of an impact, I think this project shows that it’s entirely possible to reuse old frames that a lot of people don’t find valuable.