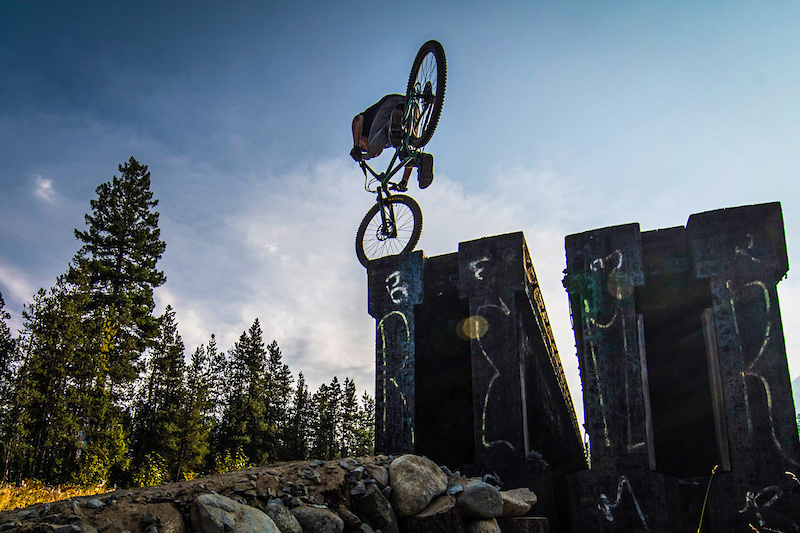 Video: Dylan Korba mixes trial and freeride on a semi-rigid

Turn on the kettle, take a few minutes to read Dylan’s words, then sit back and enjoy the montage at the end.

How we got here.

Sometimes when you plow the field, you sow seeds without even knowing that they have made their way into the ground. In some ways, the story here is pretty straightforward. I went to school, met a girl, grew a beard, got a job, and we moved to the mountains. My heart is very present in each of these things (except maybe the beard), and with every single story there is another chapter ahead of it.

Go back to the mid-2000s and cycling was my life. That was the whole story, and the only thing that really mattered was being on two wheels, I would put all the parts of my life around my bike. It was that wonderful time of year, Crankworx, and I had the opportunity to do a few tours with none other than Cookie and a friend of his from the East. I was riding with as many people as possible at the time. Whether it was taking a ride with someone in the chair or rolling with some locals in one of the stores, the opportunity to meet people and have positive experiences seemed endless.

Fast forward to “I got a job and we moved to the mountains” and I find myself strangely positioned as an architect living in Pemberton and working in Whistler. I kept riding through my aging stable of bikes until they were just junk, from Pemberton to the transfer station. The new spongy carbon bikes are cool but to be honest I didn’t really want them but really wanted a Chromag “steel is real” hardtail, all the cool kids are shredding them.

If I remember correctly, their website described the Chromag Stylus as a bike that “didn’t care what you threw at it” and it “wasn’t designed to go up fast”, but also that you wouldn’t care because that he would leave you as the “purveyor of your own destiny,” or something like that. Yeah, I was addicted. Always on a tight budget, I noticed on the Pinkbike Buy and Sell, that Chromag was selling old stock of the Stylus and I was like BINGO! Of course, the DM to buy the frame ended up in Cookie’s inbox, what a fortuitous coincidence.
My first stylus was a 26 inch wheel frame. I didn’t care, I still had 26 inch wheels and after tinkering with a mixed kit of old parts through donation and bartering with a few cases of beer, my new dream bike emerged. I ripped it up in the bike park, the local trails of course, and the Mackenzie Downhill Run and Stylus kind of rekindled something that had been a bit dormant while continuing other programs.
As 2019 waned, Cookie asked me if I would ever be interested in setting up a small edit on the stylus. Finally, with some free time after completing the professional exams, Cookie introduced me to filmmaker Radek Drozdowicz and photographer Matt Bruhns. We met at the Pemberton Bike Co. and discussed the idea. After that, Chromag got some 27.5 under me in the new Stylus platform, and after a few hundred hours of digging, lots of crashes, wildfire smoke, rain, a failed attempt from backflip, rat shack, driving with big butt, snowstorms, many cafes and a global pandemic, we had a montage. I hope you enjoy it as much as I do to get me back in the saddle.
Thoughts on the set:

In many ways, this project was like a daydream’s bike. I hadn’t ridden in front of a camera for a decade, but there was always something that reminded me. I would look at the world around me and just want to ride it. I always wanted to create lines and ride them but it had been hard to find the time. Editing gave me back a cycling goal and something to work towards. I really wanted to give the best of myself and I was curious to know what the result would be …

The first hurdle even before filming began was to adapt to the 27.5-inch wheels. I know it sounds silly, but the new standard wheel size was a bit difficult for me to figure out. The balance points were all slightly different, and I was really unstable for a while doing trial type movements. As I adjusted my ride, I realized the bigger wheel was great for mixing testing and trail riding, so off we went. The bike rode smoother, the looser angles added stability, and you can ride just about anything.
Technical boulder jumping is something all trial guys do and I had imagined a few lines on my regular mountain bike rides. The first line that Radek and I filmed was relentless, it took us 3 days for maybe 15 seconds of footage. Even though the movie had cuts on that line, I was determined to walk the entire line just to prove it to myself. Radek was so patient and I’m sure he sometimes thought I wouldn’t make it, but after 3 days and 60-70 attempts I finally did it and it gave me the confidence to know I could carry out this project.
I had kept a catalog of areas around Pemberton that I thought were cool to drive and that inspired me in general. I had no interest in riding along the existing trails, I wanted to shoot in areas that inspired me and I hope that in the end those areas inspired Radek and Matt as well. Areas ranged from beautiful mountainside to cool roadside features that I had noticed on the way to work. One of the best things about Pemberton is all the amazing trails but they wouldn’t exist if it weren’t for endless amazing terrain so you can always find something new to hike .
Our alpine shooting was difficult and we didn’t have a helicopter for sure. The alpine zone is a good way to get into the backcountry without a ton of access, you can’t exactly get there with a truck. Getting these shots really showed Radek and Matt’s dedication. I carried the camera gear on a moto-trial bike and Radek actually cycled and pushed my bike up to about 18km and 1700m. Matt did the same a day later on his bike to find himself. We wanted to start early so we went the day before and stayed in this little tree line hunter’s cabin. We had been warned that the cabin was full of pack rats, but luckily someone had stamped them out and left plenty of notes to remind others to keep doors and windows closed. Early in the morning we had one last push in the alpine and a great day of shooting ahead of us.
One of the key lines was in the North Rutherford Creek area and was truly imagined and created collectively. I had seen a big boulder that I wanted to use as an obstacle and when I showed the guys the area they explained to me how cool it could be to make a line along the ridge leading to the boulder. This line ended up taking me most of the summer to build and I think it was a bit emotional for the whole team. I think we’ve each had our struggles on that line. I had a really big accident which luckily only ended up with bruising for a few weeks. Cinematically, we had lighting and weather issues changing all the time and it just wasn’t possible to finish filming this segment in one session. We had smoke, rain, sun and snow for about 4 weeks and I only had weekends to film. So that line was a major push, and I didn’t quite get what I wanted, but the big boulder isn’t going anywhere.
In the end, the project was a really important self-exploration for me, and I was really happy to prove to myself that I can still ride in ways that are unique enough to be a part of something special, and very grateful that Cookie and Chromag are on board to define this opportunity in motion!