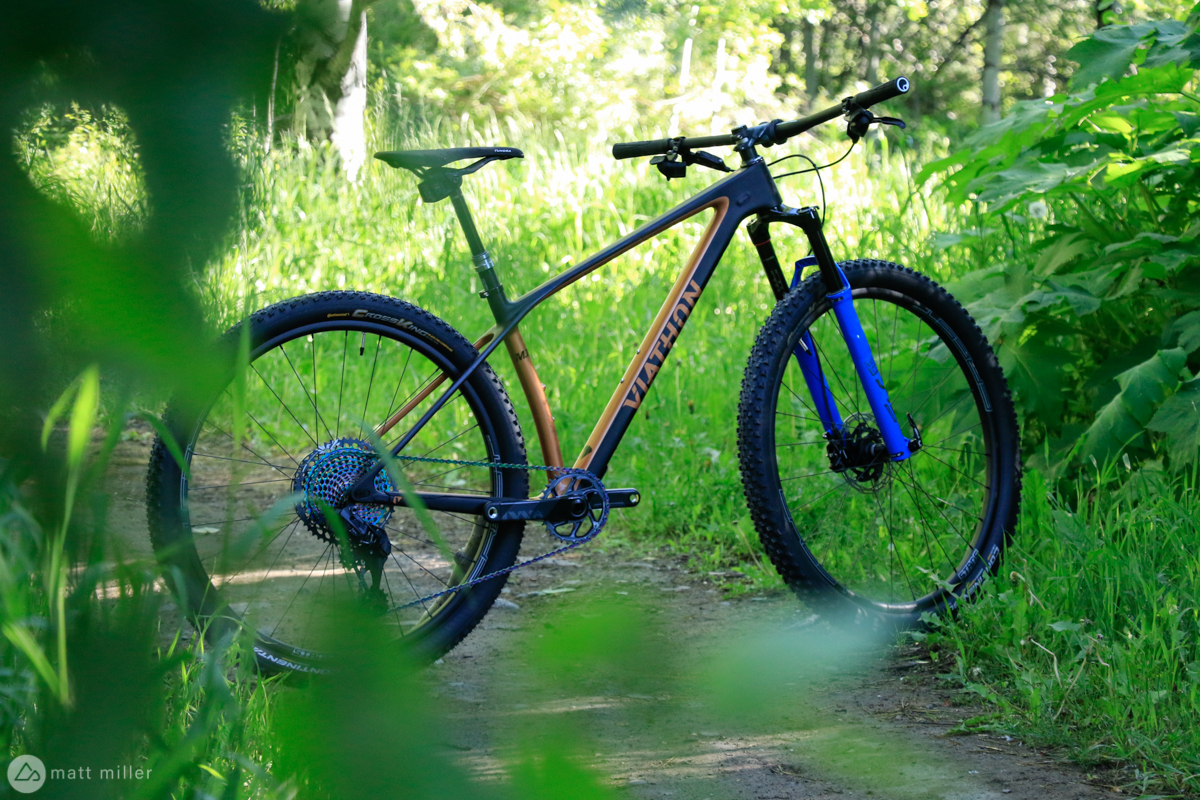 With so many brands already rushing to make room in the cycling industry, the debut of the Viathon was one that mountain bikers least expected. For starters, the new brand only rolled out one mountain bike, the M1. The other two options included a road bike, the R1, and a gravel bike, the G1. Deep down, most of us didn’t know what to make of Walmart’s stigma attached to Viathon.

The M1 is a conservative hardtail, with little advantage, although there is a lot of class. Its full carbon shines with superb colourway, comes with top of the line SRAM components, a modern building kit, internal cable routing and good tires – something you will never see in the Walmart bike aisle at two floors crammed between ammunition and car tires.

The Walmart association is difficult to shake. Many of our parents bought us our first bikes from a big box store when we were little. We rode them for years, only to come to the conclusion that despite the flame graphics on the side of the tube, they’re actually not cool and that Walmart is evil and swallows small businesses full-mouthed.

Next, the descendants of the Walton family invested tens of millions of dollars in developing one of the nation’s top mountain biking destinations and opened their private property near Aspen, CO to build new trails that they have opened to the public. It is conflicting to say the least.

Walmart’s investment in the bike continued as they developed Viathon, but now that that horse is lying on the ground dead and bumpy, let’s talk about the bike.

On a recent trip to Sun Valley, Idaho for a media event and the city’s first Outerbike, which included a Viathon demo, I took the M1 for a ride on a local trail in Sun Valley.

I rode the Viathon with my eyes more intensely than the other test bikes. Internal cable routing? To verify. Chain slam protection? To verify. Down tube protection? Yeah. A SRAM XX1 Eagle 12-speed drivetrain? Uh huh. Dropper station? Yes, a RockShox reverb. What about the wheel configuration? Stan wheels and Continental tubeless tires. Wow, not bad, I thought. Best of all, the M1’s weight was in the 1920s.

A group of us hiked the M1s to the Adam’s Gulch trails, about fifteen minutes from the site. I immediately noticed the responsiveness and lack of mush at the back. It had been a few years since I had ridden a semi-rigid. I could tell it would be a fairly gentle climb, and it was enjoyable.

The rigid carbon frame means efficient power transfer from the pedals to the rear wheel, and the Continental CrossKing tires slipped easily through stones on hard trails. I climbed a steep climb, enjoying the grind and full efficiency of the hardtail.

The Viathon’s geometry is square and cross-country focused, and puts a lot of the rider’s weight forward, while the 70mm stem allows riders to put even more weight on the front tire to hold it down. uphill. The long rod also opens up the 417mm of reach on the frame. Handling and agility at low speeds are also excellent on the M1, making it easy to change direction immediately. Don’t want to pedal over the protruding rocks of the trail? The M1 snaps left or right in a millisecond to make a detour.

For the smooth Sun Valley trails that propelled us into the Idaho backcountry and opened up views of verdant mountains speckled with yellow wildflowers, I felt like pedaling further and further on the M1 slight. But, with another trip scheduled in an hour or two, it was time to turn around and head back to the site.

So we all lined up and picked up speed towards the trailhead. Once I started to descend on the M1, I realized exactly what the bike was for, whether it was Viathon’s intention or not. This quick handling does not go away when the Viathon sinks with gravity. The 69.5 degrees. the head angle is steep from almost every margin these days, and now it could be just north of the XC stadium.

What I’m getting at is that the new age XC bikes have relaxed their geometry to make them much more comfortable to descend, while the looser head angles haven’t subtracted the bike’s climbing ability. . Viathon however, stuck with proven XC geometry and you can feel it.

I had a hard time feeling comfortable going down on the Viathon M1 because the steering was so responsive and the bike so advanced, due to the long stem and steep head angle. Riding on the bike is mostly done with your hands, rather than putting your hips in the corners, which feels a bit old-school.

The chain slam was quite loud as the M1’s shield has no soundproofing quality, it is primarily for paint protection and is thin. The internal cable routing also makes a lot of noise and brings more noise to the ears of the rider. When I stopped to examine the cable routing and double checked their other bikes, all of the routings are shaking and looking pretty loose.

The building kit was super strong, however. The RockShox SID packs a punch and is a great lightweight fork. SRAM Level Ultimate brakes provide plenty of power for the bike, and Stan’s Crest wheels, with an internal width of 23mm, are perfect for the bike, as it should be since the Viathon looks like a cross country hardtail. .

And while the M1 wasn’t the nicest bike I’ve ridden lately, I wouldn’t say it’s bad at all. Buyers just need to know that the M1 rides like an XC hardtail, despite Viathon saying it can appeal to a wider base. For me, Viathon’s messaging presents a conflict.

Jeff Barber took a look at the M1 when it debuted at Sea Otter. Jeff speculated that while Viathon markets the M1 to a larger base of riders who want a more affordable carbon trail bike, the geometry mirrors that of a cross-country racing hardtail. I hadn’t read this since April and forgot the context until it was time to write this review. I reread it and agree with his point of view after riding the M1.

The M1 is very light, looks great, and is an excellent climber, but the geometry is too sleek to appeal to non-racers.

Although made of aluminum, and with a lesser parts kit, the Commencal Meta HT AM retails for $ 2,100 with geometry that sits on the opposite end of the spectrum for a hardtail, and probably much more comfortable to descend. .

For $ 2,400, Guerrilla Gravity also sells a trail-worthy hardtail, made of steel, with an NX Eagle drivetrain and more relaxed geometry.

Now looking at the prices and weights of the three ribs mentioned directly above, Viathon has the advantage over the price and the included build kit, and the weight, but the other three seem more comfortable for the rider of every day the same Viathon rider says they’re after.

I could see Viathon having a lot of success with the M1 if they marketed the GX build as an entry-level hardtail, for young riders who want something they can crush XC laps on and race on. of the weekend. The M1 is certainly competitive in this category. Or, for someone who wants to save clay compared to buying an S-Works RIB, or something similar.

I only put in about fifteen miles on the Viathon, but there was a lot I could say about my time with it. Personally, I don’t think this is the most comfortable trail bike for the everyday rider. I would look at other brands if I was going to buy a hardtail for everyday, non-competitive trail riding. If, however, I was looking for a hardtail that I could cover miles of training on, compete in XC races, and save some money (hey NICA runners), the Viathon would be at the top of my list.