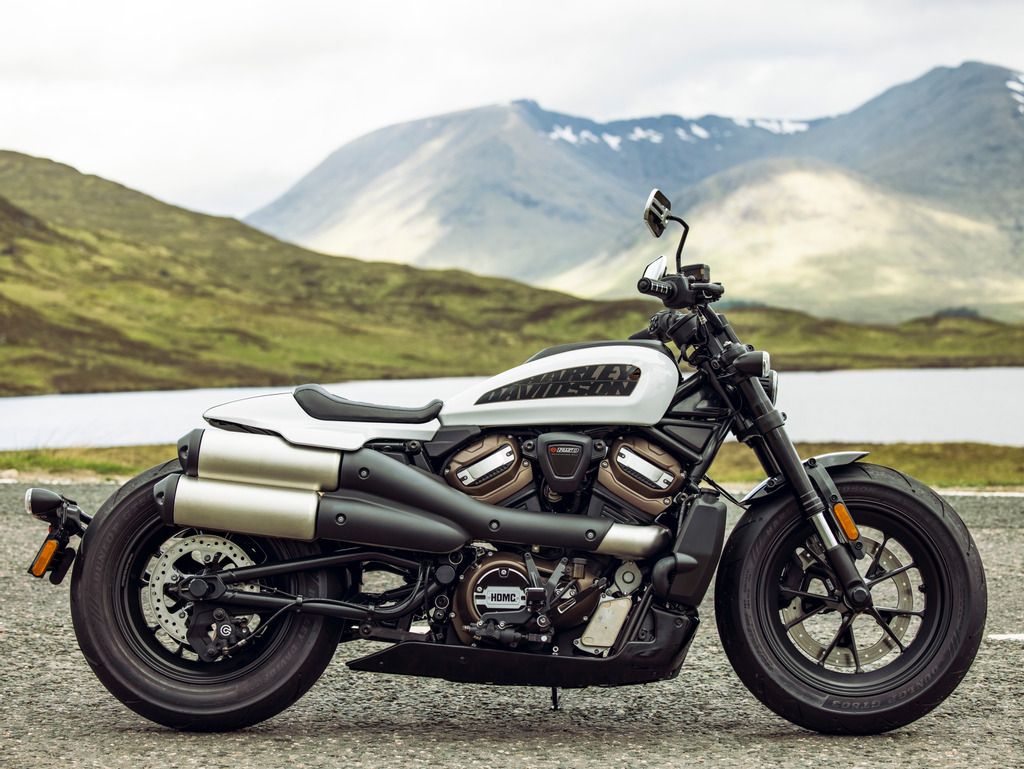 Harley-Davidson entered a new era with the introduction of the liquid-cooled Revolution Max engine. First seen in the Pan America adventure bike, its second application was in the all-new Sportster S model, eventually replacing the original Sportster which has been in production since 1957.

Harley Davidson introduced the Sportster in 1957 as a lightweight, compact sports cruiser model. Before the Sportster, there was the K model, which used a 750 cc flathead side-valve engine, designed to compete with British manufacturers such as Triumph, Norton and BSA, which were hugely successful in American racing on a flat track.

The 1957 Sportster used most of the chassis and suspension components of the K model, but added an overhead valve version of the engine, a 45° V-twin integrated unit with the gearbox. The original Sportster engine was called Ironhead and displaced either 883cc or 1000cc. This engine ran until 1985, when it was replaced for the 1986 model year by the Evolution version of the engine, which featured aluminum cylinder blocks and cylinder heads.

By 2000, the engine was unable to meet European emissions regulations, so the Sportster was discontinued in that territory and others around the world. The new Sportster S featured only the third new engine in Sportster history.

9/10 Step into the Sportster S

In 2021, Harley Davidson unveiled the new Revolution Max engine, a 60° V-twin displacing 1247cc, featuring water cooling and producing around 150 horsepower. It was first fitted to the Pan America adventure bike but quickly found a second home in the new Sportster S, released in late 2021. For this application Harley Davidson has down-rated the Revolution Max 1250T version of the motor to 125 horsepower but focused on improving the torque curve.

They installed the engine as a stressed member of an entirely new chassis, with fully adjustable inverted forks and a monoshock in the rear, giving the low-slung model a smooth rear-end look. The electronic suite also brings the Sportster S bang up to date.

Perhaps sadly, Harley Davidson’s traditional “potato-potato” exhaust note is gone with the Revolution Max engine. While this may be a disappointment to many, no one can argue that the Revolution Max engine sound isn’t distinctive. It has a throaty, aggressive note thanks to the flat-track inspired raised mufflers, which choke the sound as little as possible. Fortunately, the exhaust manifolds that run along the right side of the engine don’t put too much heat on the rider’s leg.

Regular Harley-Davidson riders will know that the gearboxes were never smooth or quiet in operation: they always had a tough, thick, mechanical feel that matched the bikes personality better than you might think.

With the new engine, however, comes an all-new six-speed gearbox operating via an assist and slipper clutch for a whole new level of refinement. Lever travel is still quite long, but the clutch is smooth and light and the gears engage with a solid feel, matching the performance of the engine.

The words ‘Harley Davidson’ and ‘electronics’ may sound strange but, with the new Revolution Max engine, that perception is rightly challenged.

The electronics suite on the new Sportster S is unlike anything you’ve ever seen on a Sportster (or any other Harley, for that matter, except the Pan America).

There is an internal measurement unit (IMU) controlling the tilt sensitive ABS and traction control and wheel control (on a long low cruiser? Yes!) There is a tire pressure and no less than five riding modes, from Rain, Road and Sport (preset) and two customizable modes by the rider. In sport mode, the Sportster S looks like no Harley Davidson has ever felt, with crisp, snappy throttle response that thankfully the chassis can handle just fine.

It was Philip Vincent, creator of the iconic Vincent v-twin motorcycles in the 1940s and 1950s, who said: ““What isn’t present takes up no space, can’t bend, and weighs nothing – so eliminate the frame tubes.” Thus, the Vincent V-twin engine was a load-bearing element of the motorcycle frame.

Harley Davidson took the same route for the Sportster S, with the Revolution Max engine being a stressed part of the chassis. The headstock and rear suspension assemblies are bolted directly to the engine resulting in a much stiffer chassis and impressive weight savings – Harley claims up to 60 pounds of weight saved over the old frame Sportsters. It’s a lot.

It all adds up to advantages in the way the bike handles, steers, accelerates and brakes, which is nothing like day and night compared to the old Sporty.

Showa suspension was used front and rear: inverted forks up front and mono-shock at the rear. Both ends are manually adjustable for compression and rebound and handle bumps in the road brilliantly, while offering excellent cornering behavior.

The rear suspension only has two inches of travel, which can be a little compromising, especially if the rider is on the heavy side and bumps can be transmitted to the rider’s spine, especially with the foot riding position. forward and the thin padding of the seat.

But make no mistake, it’s the best-handling Sportster ever built.

Harley really went all out on the Sportster S, fitting it not only with Showa suspension but also with Brembo brakes – the best in the world.

There may still be only one front disc, but the four-piston caliper grips the 320mm disc with enough force to deliver a confident and reassuring slowdown. Best of all, there’s so much feel at the lever compared to the wooden elements used on many Harleys.

As with many long-wheelbase cruisers, the rear brake gives braking effort out of proportion to its size, meaning the Sportster S not only rides better than any Sportster before it, but stops better than almost any Harley you would like to mention. , with the now normal exception of Pan America.

Harley Davidson instruments range from the impressive, as on the large, faired touring models, to the ridiculous, as on the 2019 FXDR, which trumpeted its two-inch LCD screen mounted on the handlebar riser clamp and was barely visible with a magnifying glass!

The Sportster S breaks new ground by having a single circular full-color TFT instrument cluster, which manages to be both stylish and functional. It contains all the information you need, presented in a clear way. You can also connect your smartphone via Bluetooth to access phone, music and navigation.

Talk about kicking and screaming Harley Davidson in the 21st century!

1/10 The revolution is over

The Harley Davidson Sportster S is a sign, if any, that the company can successfully update its model lineup without losing any of the essences that make a Harley, a Harley.

The Sportster S brings new levels of performance and handling to the company and, although the engine is completely new and only has the configuration in common with the HD engines of the past, it is still unmistakably a Harley v-twin. Davidson.

Q: How much does the Sportster S cost?

Q: How many cc’s is the Sportster S?

Q: Can two of you ride a Sportster S?

Q: How powerful is a Sportster S?

Quick analysis of the Ragley hardtail range for 2023